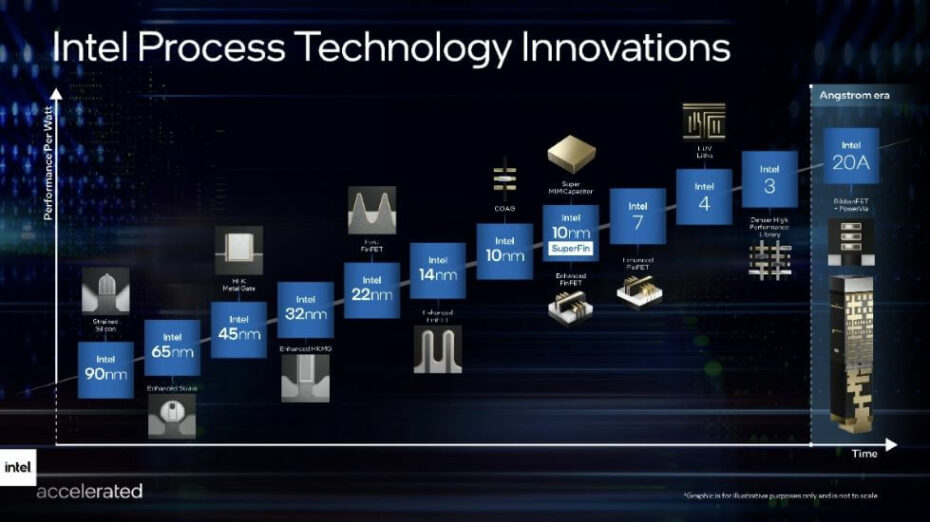 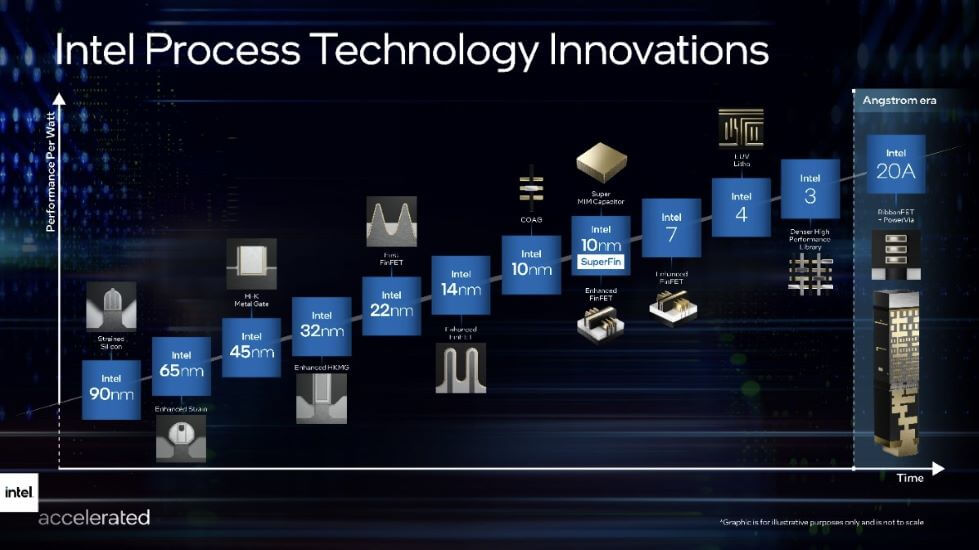 The News: Intel Corporation (Nasdaq: INTC) today revealed one of the most detailed process and packaging technology roadmaps the company has ever provided, showcasing a series of foundational innovations that will power products through 2025 and beyond. In addition to announcing RibbonFET, its first new transistor architecture in more than a decade, and PowerVia, an industry-first new backside power delivery method, the company highlighted its planned swift adoption of next-generation extreme ultraviolet lithography (EUV), referred to as High Numerical Aperture (High NA) EUV. Intel is positioned to receive the first High NA EUV production tool in the industry. Read the full news release in the Intel Newsroom.

Analyst Take: Adding to what has already been a busy year for Intel, the semiconductor firm has announced an aggressive four-year roadmap designed, in the words of Intel CEO Pat Gelsinger, to lead Intel to “process performance parity in 2024 and leadership by 2025.” This includes the unveiling of a RibbonFET, anew transistor architecture; PowerVia, a backside power delivery system; updated advances in 3D packaging through Foveros Omni and Foveros Direct; and a new node naming framework designed to reflect the upcoming shift from nanometer to angstrom nodes.

This announcement comes right after its impressive Q2 2021 earnings report (where it beat consensus estimates for both earnings and revenue) and amid rumors that it may be in talks to acquire fab company GlobalFoundries, a move that would greatly expand Intel’s fabrication capacity.

With this move, and other recent announcements that we’ll discuss below, we believe the Gelsinger-led Intel is charting a very achievable course to regain a dominant leadership position in the global semiconductor market and is assembling the right components to make it happen in the long run.

Leading Up to This Announcement

The semiconductor industry is in the grips of a global supply chain crisis and a lack of production capacity that has resulted in widespread chip shortages. Intel is also working through a series of pre-Gelsinger business decisions that have impacted its own production capabilities, all while rivals have been moving aggressively to stake out their own leadership positions in both design/IP and fabrication.

But Gelsinger has been both busy and aggressive since taking the helm of Intel. This past March, the company announced major manufacturing expansion plans and a commitment to invest US$20 billion to build new U.S.-based fabrication facilities. It also announced its intentions to expand Intel Foundry Services to become a major provider of foundry capacity for global customers. And during our own Six Five Summit last month, which was kicked off by Gelsinger, the company announced its new Infrastructure Processing Unit (IPU), a programmable networking device designed to intelligently manage system-level infrastructure resources in the data center. These are all strong moves that today’s announcements support and build upon.

The company has announced two new process technologies, both key to the production and use of next generation chips:

Supporting this from a production perspective, Intel has also reaffirmed its plans to implement the next generation of High Numerical Aperture (High NA) ultraviolet lithography, a key element of its expanded production plans.

The company also unveiled two new packaging technologies, Foveros Omni and Foveros Direct, designed to improve chip density through 3D stacking. Meteor Lake is slated to be the second-generation implementation of Foveros, targeting a bump pitch of 36 microns and a thermal power draw range of 5 – 125W. Per the announcement:

The company also unveiled a new naming nomenclature for its upcoming chips, one that is designed to “creating a clear and consistent framework to give customers a more accurate view of process nodes across the industry” and better reflect the value proposition customers can expect of its new Intel Foundry Services. It also sets the stage to shift the focus from nanometer (nm) node descriptions to angstrom node descriptions, an important step as chip density continues to increase (1 namometer = 10 angstroms).

It’s a bit different to think of chips as not tied to a particular nanometer node, but it makes sense.

Hidden in this renaming announcement is the essence of Intel’s “parity by 2024 and supremacy by 2025” strategy – the Intel 20A is slated to be followed by the 18A (which is already in design and slated for production in 2025).

This announcement strongly reinforces Gelsinger’s previously stated goal of Intel reclaiming a dominant leadership role in both design and fabrication, two halves of a strategy that we believe are essential to not just the success of Intel, but of the global semiconductor industry that needs leadership and expanded capacity over the long-term. To that end, and in support of Intel’s revitalized fabrication plans, the company has announced a commitment from AWS as Intel Services’ initial customer.

Gelsinger also shared an important win for Intel announcing that Qualcomm would be partnering with Intel in 2024, embracing the breakthrough RibbonFET and PowerVia technologies in the A20. Qualcomm CEO Cristiano Amon also alluded to the company’s positive position on having access to another U.S. based leading-edge foundry partner. I believe Intel’s ability to win over a larger swath of fabless semiconductor manufacturers will serve the company well both by augmenting revenue and cementing its role as a partner to the semiconductor ecosystem regardless of the process–even with competitive chips.

Overall, a solid roadmap full of encouraging advancements. But, as I’ve said for multiple years, and even more under the guidance of Pat Gelsinger, execution will be critical.

Is the path ahead for Intel an easy one? No, it’s not. But we’re excited by the energy and focus of Intel under Pat Gelsinger and believe the company is on the right track.

Intel Must Execute Its New Strategy Perfectly to Win Back Investors, April 8, 2021

The Dip in Chips: How the Semiconductor Industry is Responding to the Global Supply Chain Crisis