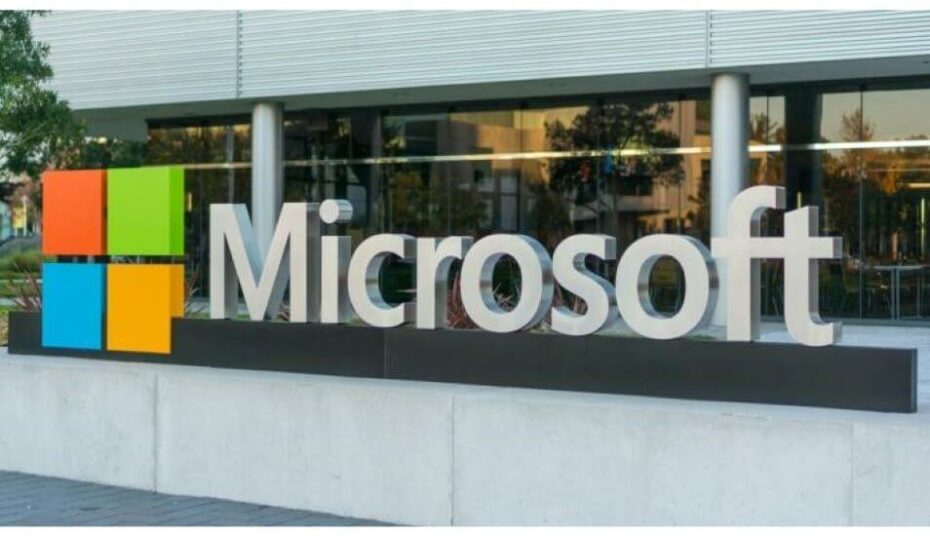 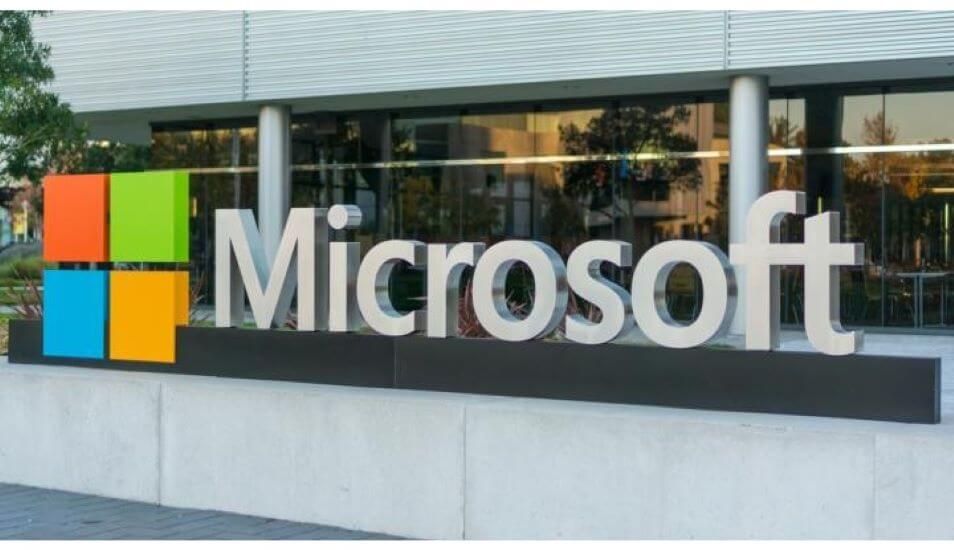 The News: Microsoft shares fell 2% in extended trading on Tuesday after the software and hardware company reported fiscal fourth-quarter earnings.

Revenue rose 21% year over year in the quarter, which ended June 30, according to a statement. In the previous quarter revenue had increased by 19%. Read the full news piece on CNBC. 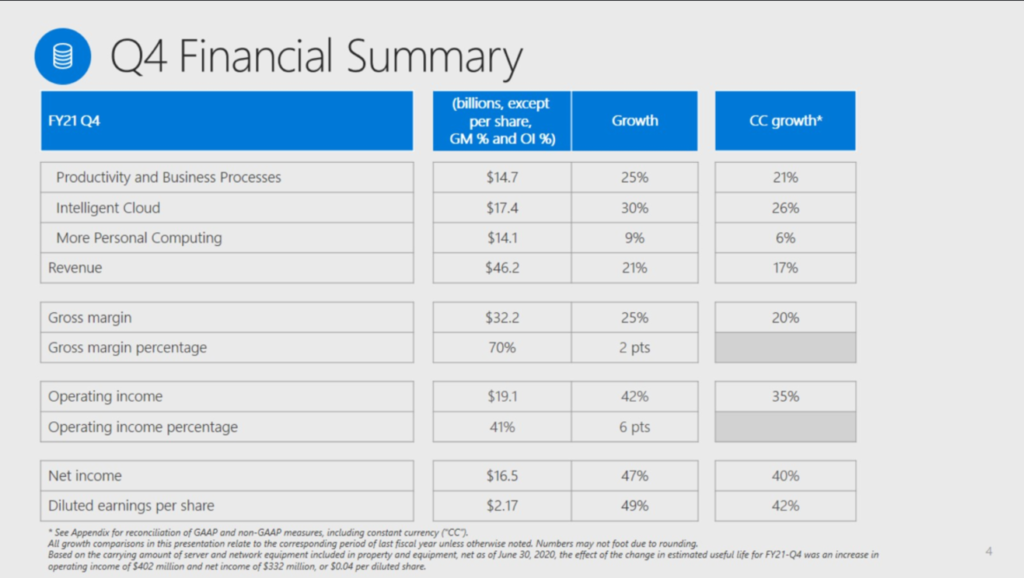 Analyst Take: Microsoft delivered a robust result in its fiscal Q4, reporting revenue of $46.15B and EPS of $2.17, topping consensus estimates of $44.24B and $1.92 EPS respectively.

For this earnings period, I was once again closely watching the company’s performance in three major areas. Productivity, Intelligent Cloud, and Personal Devices/Computing. This encompasses the vast majority of the company’s revenue and it had strong results in all three, with Intelligent Cloud, Dynamics 365, and Azure leading the way. Personal Devices (More Personal) has a few caveats that I will point out later in this piece :

Intelligent cloud and Azure saw strong growth at 30% and 51%, respectively, showing continued strong cloud demand and an solid sustained result versus last quarter where growth came in at 26% and 50% respectively. There have been some question marks over the past several quarters as to whether Microsoft could maintain this level of cloud demand as the pandemic continues, and now moreover as we exit the pandemic, but as I see it, there is a strong correlation between the economic rebound numbers and investments in cloud technology. Furthermore, there are industries that have been in contraction that are starting to bounce back that will be turning to tech investment to future proof their business–Microsoft stands to benefit from these rebounding industries.

With all of this in mind, it’s hard not to be bullish about the Azure offerings. Microsoft and AWS continue to expand their offerings and this expansion is leading to greater revenue and stickiness among its customers. I said last quarter that I wouldn’t be surprised to see this 45-50% growth for Azure sustain for another 3-4 quarters based upon current momentum. 2/2 so far, with this quarter coming in just above the top of the range.

Microsoft’s Productivity segment delivered another robust performance which continued a string of double-digit growth (25%), beating last quarter’s 15% growth as demand in the market for Office 365 continues to rise. The area that has continued to capture my attention has been the growth of Microsoft’s own play in CRM/ERP — Dynamics, and Dynamics 365 business. I feel this area of growth is benefitting materially from the continued strength in the company’s Azure business as well as its Power Platform gaining momentum. This bodes well for the Dynamics and Cloud ERP (Dynamics 365) category, which the latter continues to be big for this category delivering 49% growth this quarter.  I’ve been speculating for some time about a tighter race in business productivity and this thesis seem to be gaining momentum–especially with Salesforce and Microsoft continuing to look like the fiercest of competitors. I also continue to be impressed by the company’s CDP platform, Customer Insights, as an extension of its business applications or as a net new business winner against other business software providers.

LinkedIn continues to look like a great portfolio addition and source of high value application data with revenue up 42%. This acquisition has been a bit of an unsung hero in the productivity and business processes category, but I see the long-term role that LinkedIn has to play as a critical differentiator and important for the company’s desire to play and expand in hot social communities, much like it has with GitHub for developers. The LinkedIn audience is such a valuable data mine and Microsoft has many ways to continue to unlock it. Yet, the company has continued to give the platform autonomy, which I also believe is important.

The last category I tracked closely for this quarter was the “More personal” segment, which saw 9% category growth led by growth in Windows Commercial at 20% and advertising, which was up over 50%.

As I mentioned above about the caveats in More Personal. Let’s unpack those a bit further:

Gaming saw a small decline with Xbox down 4%, following what was a very strong quarter for the segment. I expect this will pick up as chip availability grows and with holiday seasons falling in the first half of the new fiscal.

Surface revenue saw another decline this quarter after a small jump during the third quarter coming in at 20% decline. This will be interesting to hear more about in the earnings call and follow up analysis. Microsoft had been showing signs of competing in Apple’s ultra high-end laptop space, but the growth has been slower than overall PC growth, which has been pegged around 30%. It’s worth noting a lot of the growth in PC and Notebook has been down market, which isn’t an area where Surface is trying to be present. However, the decline hits Microsoft in a few ways given the material decline in Windows licenses, which were down 3% this quarter along with revenue from consumer PC licensing also being down 4% versus a jump of 44% last quarter.

Overall, FY ’21 Q4 was an excellent quarter for Microsoft. The growth outpaced last quarter, which had equaled its best since 2018. The key going forward will be sustaining this strong momentum. As its cloud business continues to grow, large numbers can challenge big growth percentages, but the uptick this quarter shows that there is still growth to be had. Satya Nadella has indicated in many ways that he sees a clear growth opportunity, and that the large quarterly results are clearly not a prohibitor of future growth.

It also remains clear that even the pandemic and its lingering effects continue to propel digital investment in areas like Teams and Cloud, rather than negatively impacting spending. We are also seeing this spend and strength in technology continue even as more of the economy is opening up, and certain industries that have been devastated by Covid-19 are starting to return to a more normal business rhythm.