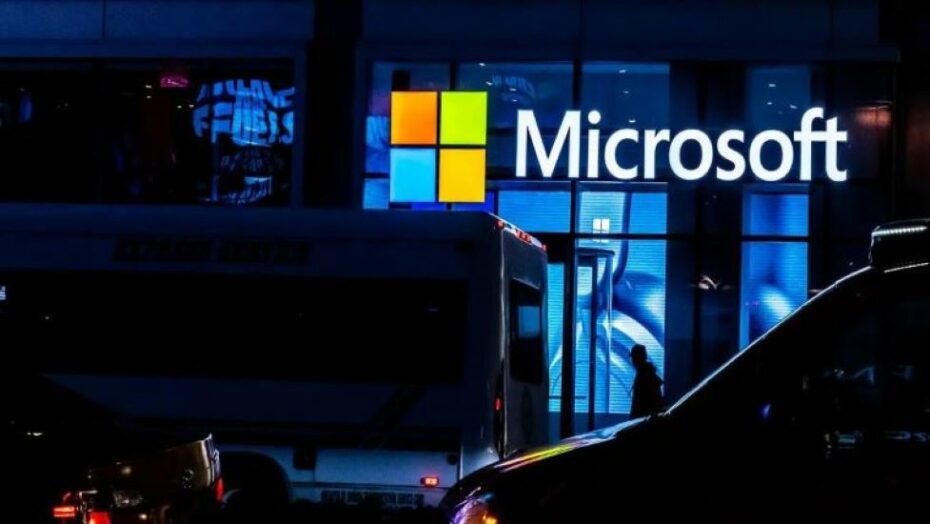 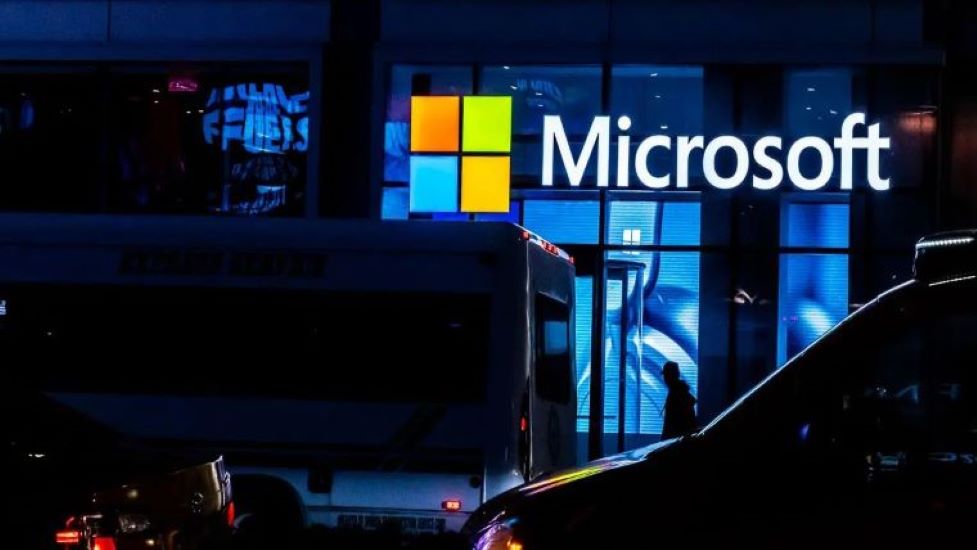 The News: Microsoft reported better-than-expected earnings and revenue for the fiscal second quarter. The stock dropped in extended trading.

Revenue increased by 20% year over year in the quarter, according to a statement, compared with almost 22% growth in the previous quarter. Read the full news item on CNBC. 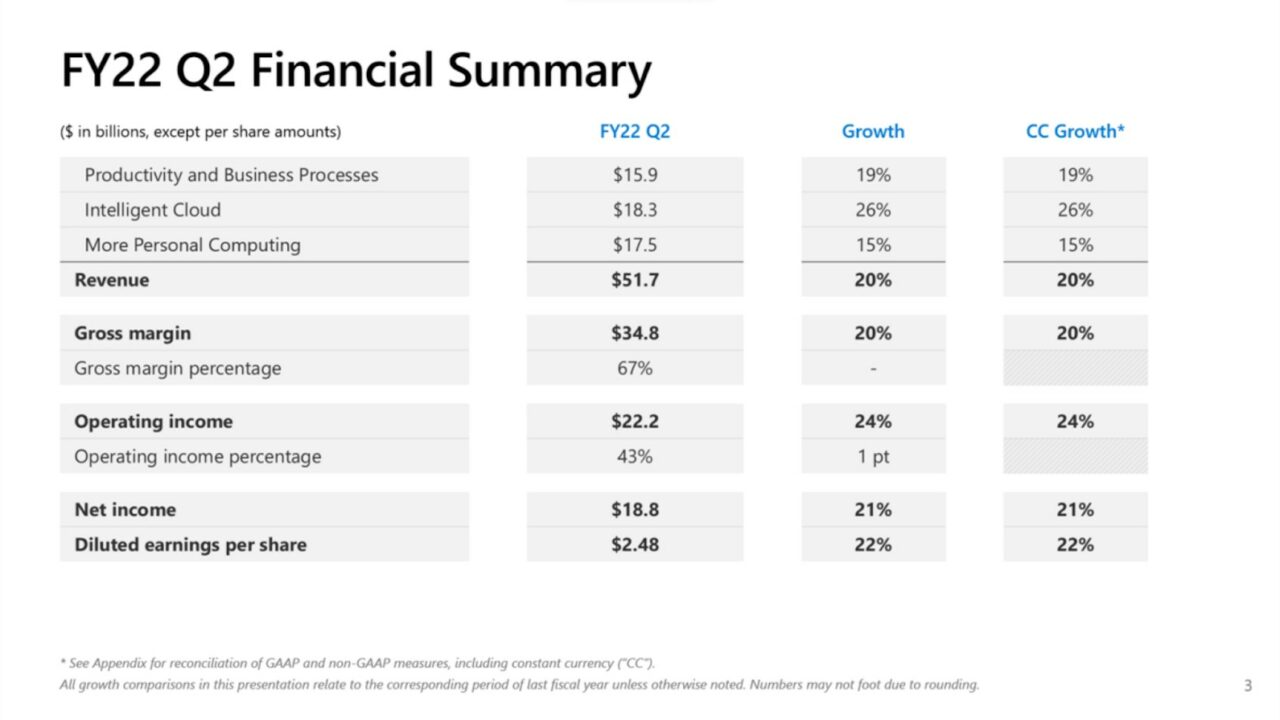 Analyst Take: Microsoft delivered a robust result in its fiscal Q1, reporting revenue of $51.73B and EPS of $2.48, topping consensus estimates of $50.88B and $2.31B EPS respectively.

The company realized impressive double-digit growth in Revenue, Operating Income, Net Income, and EPS across the board, which should add to investors’ confidence despite the recent pull back in tech that has hit most growth names including Microsoft putting it off its highs by about 15%, albeit much less than some growth names that have seen significantly steeper declines.

For this earnings period, I was closely watching the company’s performance in its three major segments. Productivity, Intelligent Cloud, and Personal Devices/Computing. This encompasses the vast majority of the company’s revenue and it had robust results in all three, with LinkedIn,, Dynamics 365, and Azure leading the way. The company saw no declines in any of its revenue categories. Surface was the only segment that didn’t grow by double digit, delivering an 8% YoY improvement.

Intelligent cloud and Azure saw strong growth at 29% and 46%, respectively, showing continued strong cloud demand and a solid sustained result, representing just a slight drop from last quarter, where growth came in at 35% and 50% respectively.

We had been watching this area very closely over the past several quarters as to whether Microsoft could maintain this level of cloud demand as we enter the late innings of the pandemic, and approach some new headwinds tied to macroeconomic forces including interest rates, inflation, and global conflicts. As I see it, there is little to indicate any macroeconomic headwinds will be slowing Microsoft’s growth in cloud, and moreover across many facets of its business.

With all of this in mind, it’s hard not to be bullish about the Azure offerings. Microsoft and AWS continue to expand their offerings and this expansion is leading to greater revenue and stickiness among its customers. I said four quarters ago that I wouldn’t be surprised to see this 45-50% growth for Azure sustain for another 3-4 quarters based upon current momentum. 4/4 so far, with this quarter coming in range. It is likely this growth will continue for another several quarters as cloud demand continues to grow.

Microsoft’s Productivity segment delivered another robust performance which continued a string of double-digit growth (19%), coming in below last quarter’s 22% growth, but still solid as demand in the market for Office 365 continues to rise. The area that has continued to capture my attention has been the growth of Microsoft’s own play in CRM/ERP — Dynamics, and Dynamics 365 business. I feel this area of growth is benefitting materially from the continued strength in the company’s Azure business as well as its Power Platform gaining momentum. This bodes well for the Dynamics and Cloud ERP (Dynamics 365) category, which the latter continues to be big for this category delivering 45% growth this quarter. I’ve been speculating for some time about a tighter race in business productivity and this thesis seems to be gaining momentum–especially with Salesforce and Microsoft continuing to look like the fiercest of competitors. I also continue to be impressed by the company’s CDP platform, Customer Insights, as an extension of its business applications or as a net new business winner against other business software providers.

LinkedIn continues to look like a great portfolio addition and source of high value application data with revenue up another 37% after delivering 42% YoY in the last quarter. The LinkedIn acquisition continues to provide robust top and bottom line numbers to the productivity and business processes category. I see the long-term role that LinkedIn has to play as a critical differentiator and important for the company’s desire to play and expand in hot social communities, much like it has with GitHub for developers, and pending regulatory approval will have with the 400 million monthly Activision gamers . The LinkedIn audience provides such valuable data and Microsoft has many ways to continue to unlock it. Yet, the company has continued to give the platform autonomy, which I also believe is important.

The last category I tracked closely for this quarter was the “More personal” segment, which saw a slightly improved 15% category growth led by a cadre of growth in Windows Commercial and OEM at 13% and 25% growth respectively along with advertising and Xbox content and services which were up by 32% an 10%.

As I mentioned above about the caveats in More Personal. Let’s unpack those a bit further:
Gaming had a nice quarter rising 16% with Xbox content and services up 2%, following what was a weak quarter for the segment. The real move here came with hardware which had triple digit growth based upon sustained demand for the company’s newest gaming consoles. I expect this will pick up even more as chip availability grows and with holiday seasons falling in the first half of the new fiscal. However, the supply constraints heading into the holiday could lead to lower revenues than what would be possible for this category.

Surface rebounded this quarter after a few small declines that had some as somewhat of a surprise as PCs largely booned during the pandemic. This quarter, Surface revenue saw 8% growth, which isn’t exactly on fire given PC demand, however, represents a trend in the right direction. I still feel Surface is the best competitive option to Apple for the high-end target audience. Given the volume of PC sales that were in the lower end of the market, it isn’t entirely surprising that Microsoft hasn’t seen bigger Surface numbers, but I’m interested in seeing the company apply more weight in this category. This week’s Apple results will be telling if M1 sales outsize market expectations.

A Blizzard of Activity

While it isn’t yet material to the earnings results, it is important to note that Microsoft did announce a massive deal to acquire Acitivision Blizzard for more than $68 billion in an all cash deal.

Read our coverage on this deal on MarketWatch.

Heading into Q3, the company is expecting $48.5 billion to 49.3 billion in revenue in the fiscal third quarter, topping the $48.23 billion Refinitiv consensus. The middle of the range, at $48.9 billion, is above the $48.23 billion Refinitiv consensus. The company also shared that it expects full-year operating margins to widen slightly. Overall, the guidance was extremely bullish especially given the general concern and negative market sentiment toward tech. As I’ve continue to reiterate that tech is stronger than much of the media narrative and Microsoft is in extremely good shape to weather any macroeconomic shifts that it may encounter.

Overall, FY ‘22 Q2 continued a very positive trendline for Microsoft. The growth remained on pace with the past several quarters, which have been some of Microsoft’s best historic results. The key going forward will be sustaining this strong momentum even with more difficult macroeconomic headwinds.

Of course, as its various business segments continue to grow, like cloud, the large numbers can challenge big growth percentages, but the uptick this quarter shows that there is still growth to be had. Satya Nadella has been relentless in his pursuit of growth, and the results along with the bold M&A activity indicate confidence in the company’s long term strategy. Despite some initial selling pressure following the results, this quarter marks another very good one for Microsoft.