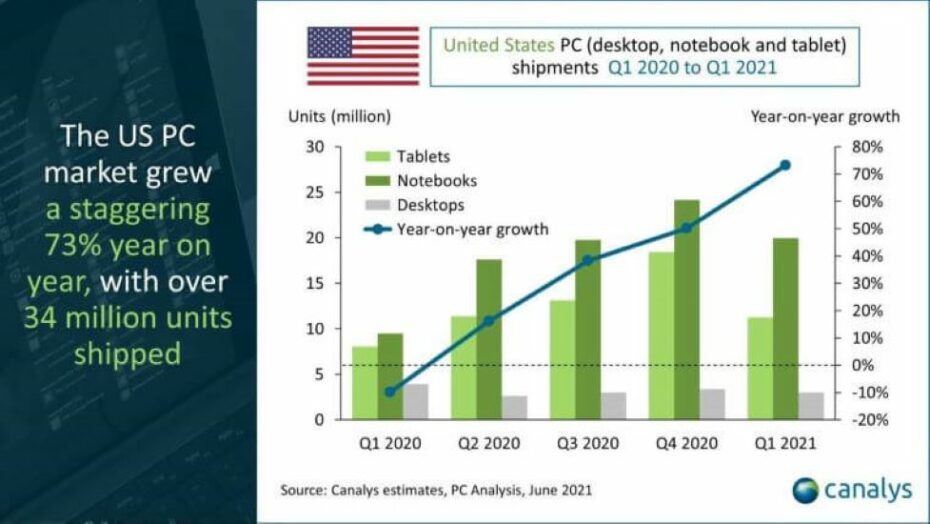 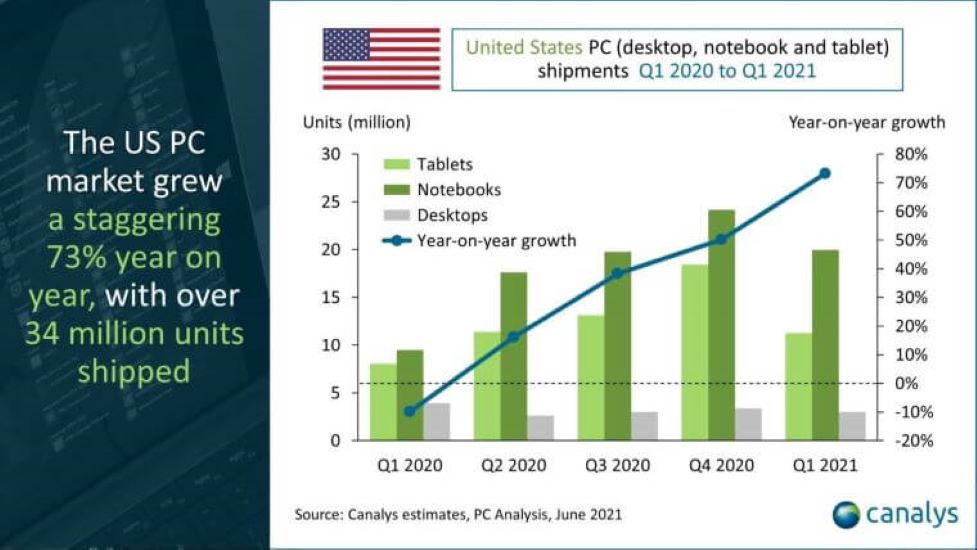 The News: HP led the way as the PC market in the United States grew 73% year on year in Q1 2021, with total shipments of desktops, notebooks, tablets and workstations exceeding 34 million units. Notebooks and tablets led the way with impressive growth, while desktops lagged amid weak demand during the pandemic. Read the full news release from Canalys.

Analyst Take: The momentum for PC’s continued into Q1 2021 with HP and Samsung leading growth, both coming in over 100% on an annualized basis.

The report looks across the board at workstations, notebooks, desktops, and tablets. Notebooks led this quarter with a growth of over 130%. Tablets saw a more modest 51% on ~11 million units. Notebooks leading growth in this period shouldn’t come as a surprise given the pandemic’s impact on remote work and learning.

HP and Samsung Had Big Q1 on Strong Chromebook Numbers

The sentiment of the PC’s demise continues to be disproven with such robust numbers. However, this quarter’s strength came in Chromebooks, which saw the most considerable growth as education required volumes of Chromebook purchases to refresh and support student requirements. Overall, Chromebook sales were up 548% on an annualized basis. Samsung saw growth of almost 2,000%, and HP, Asus, and Lenovo all came in over 900%. The Chromebook growth is noteworthy because of its significant contribution to volume at the low end.

Apple and Dell saw much more modest growth if 35.7% and 29.2% are to be considered modest. Based on the 70+% overall growth, these numbers are slower, but the results shouldn’t surprise anyone reviewing the data. Apple tends to slow in Q1 based upon the holiday cycle. While it has Chromebooks, Dell tends not to chase the low end as aggressively as some of the other names. However, Apple and Dell’s lower annual growth rates did materially reduce overall market share YoY, with Apple seeing the most significant drop at 5.5%. Again, the overall volume included a high volume of low-end devices. Apple likely concerns itself with mid and high-tier devices.

Overall, the momentum for the PC market remains strong, with remote and hybrid work fueling further demand driven by the pandemic.

There is little to indicate a short-term slowdown in the PC market. I would like to see more strength in non-cyclical PC volumes like higher-end notebooks and workstations, as this is a strong indicator of economic pickup. However, the overall growth and shipment data are encouraging, especially with the ongoing semiconductor shortage. I expect Q2 to continue to show strength in PC volume.