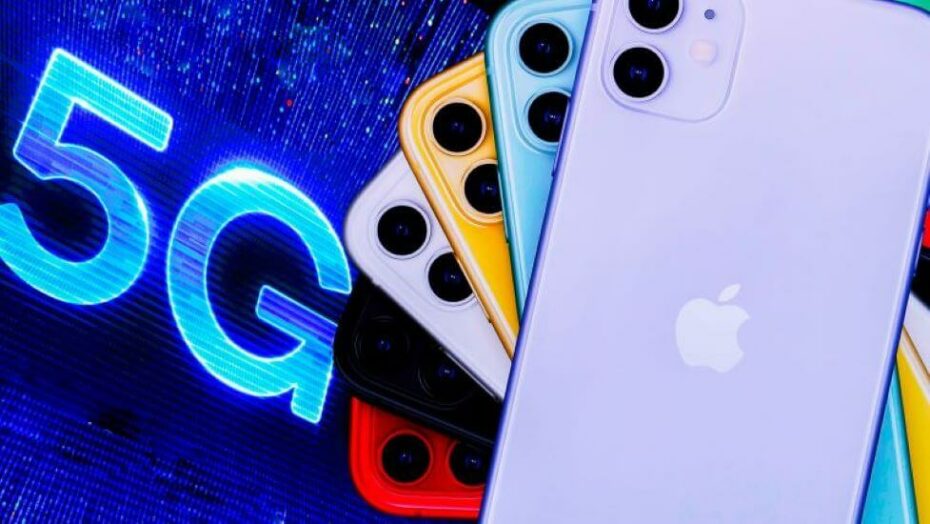 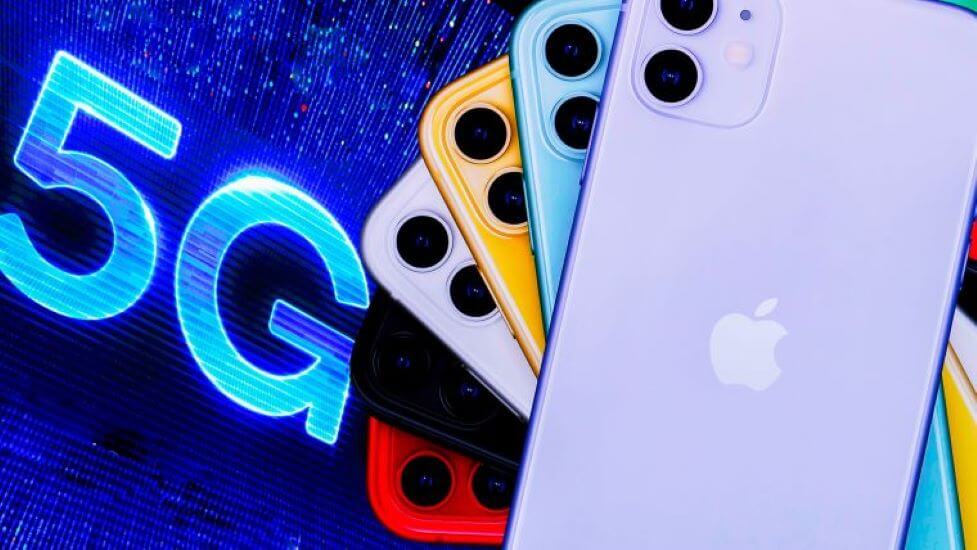 While the Epic ruling and the Zero Day Attacks were seen as mild speed bumps for Tim Cook and his ambitious growth plans for Apple. The launch of the new iPhone is all but certain to tame the nerves of many investors who may have felt concerned from Apple’s tumultuous few weeks.

With so much recent coverage surrounding the Cupertino-based technology giant, one piece of news from Apple’s launch has somehow escaped scrutiny despite deserving further inspection. Contrary to expectations and speculation of some analysts, investors, and pundits, Apple once again chose to not support the highest performance wireless available in most of its iPhones, in this case 5G mmWave.

Apple’s ongoing pattern of deferred adoption of important technologies may be investor-friendly in the short-term, but over time may erode its U.S. iPhone dominance and may undermine its path to continued global iOS growth.

All Roads Lead to mmWave

The world has already placed its bet on 5G mmWave, which is why Apple’s decision to omit it in its non-U.S. iPhone 13’s is a bigger indictment of Apple than a sign that 5G mmWave adoption is slowing. Data consumption continues to grow exponentially, so operators will need all available spectrum to keep pace, and to support new, more demanding services. It’s not a question of if mmWave bands will be needed, but when.

Global mmWave momentum is growing, with more than 120 5G mmWave capable devices available from 50+ vendors; they offer significantly greater speeds and lower TCO for carriers. On the surface, (other than cost) it is hard to see the downside of supporting mmWave for any premium device maker, especially Apple. Sure, adoption of complex new technologies and freeing up spectrum takes time, but regulators globally are forging ahead and several premium Android devices already implement it.

Speculation that Apple is doing this to control the pace of 5G innovation, or even to snap back at Qualcomm which provides key components for several of its products, also seems ludicrous. This line of reasoning would suggest that Apple would punish itself and its customers to harm one of its critical technology providers.

Global investment suggests that mmWave isn’t only important in the U.S., as might be inferred from Apple’s strategy. OEMs and operators around the world, especially in Asia, have bought off on mmWave, which in various tests have shown to be up to 16x faster than 5G in sub-6. With the recent Tokyo Olympics on display, Japanese carriers aggressively invested in mmWave; as a result, users of several flagship Android devices[1] will experience a material difference in performance.

The decision by Apple to slow-roll mmWave in its phones should baffle or even infuriate consumers, while perhaps at the same time please chartists looking for sustained revenue[2] growth– it shouldn’t, however, be misconstrued as validation that flagship phone consumers will be satisfied with second-tier wireless performance indefinitely.

A History of Holding Back Innovation

Apple’s reputation of being one of, if not the most innovative company in the world has been hard-earned; From the iPod to the iPhone, Apple has an uncanny way of building the products and services we didn’t even know we needed– usually on the backs of slightly less perfect products that preceded them. Think Zune or Blackberry if you are trying to revisit history.

Because of the fanfare with which Apple delivers its products and the cult-like following the brand has built over the past few decades, some want to credit Apple with almost infallible status. As a user of multiple Apple products, I can appreciate some of its iterative solutions, especially the fluidity of its ecosystem. However, I can’t in good faith give it top billing for driving innovation, and certainly not for delivering available innovation to its customers. The iPhone’s nearly two-decade history is an excellent example of this.

Most of us early iPhone adopters can remember the original iPhone. It ran on the Edge network, despite 3G being widely available. It was beautiful, and our data needs weren’t nearly what they are today, but essentially everyone that bought the first one had to buy another when the 3G variant became available.

The lagging adoption of the newest technologies became a norm for the iPhone. As Android evolved and Samsung and other OEM’s quickly adopted 4G LTE and 5G, Apple was always at least one complete cycle behind the curve. Its defenders would often proclaim it was about the robustness of the technology, or the readiness, or the necessity. We have seen this with its ISP’s on its cameras as well– forcing consumers to buy the very top-of-the-line iPhone to get the camera quality that was available on a variety of one or two generations -old Samsung, Huawei, or Oppo devices. Battery life is another big “launch” topic. All-day battery life has been achievable for years. Bouncing between my Samsung S20+ and my iPhone 11 Pro, the Samsung easily lasts longer, especially when idle.

Largely, consumers fall in line, but the lag isn’t a new thing, and with this most recent decision to omit support for mmWave beyond the U.S., the decision to delay innovation brings more questions than answers.

Apple investors certainly know the importance of its cycles and supercycles. And while the diversification of its portfolio into services, the developer platform, and its other hardware have contributed to Apple’s financial results, the iPhone and its supercycles carry the day; slowing iPhone sales may be somewhat worrisome for some. 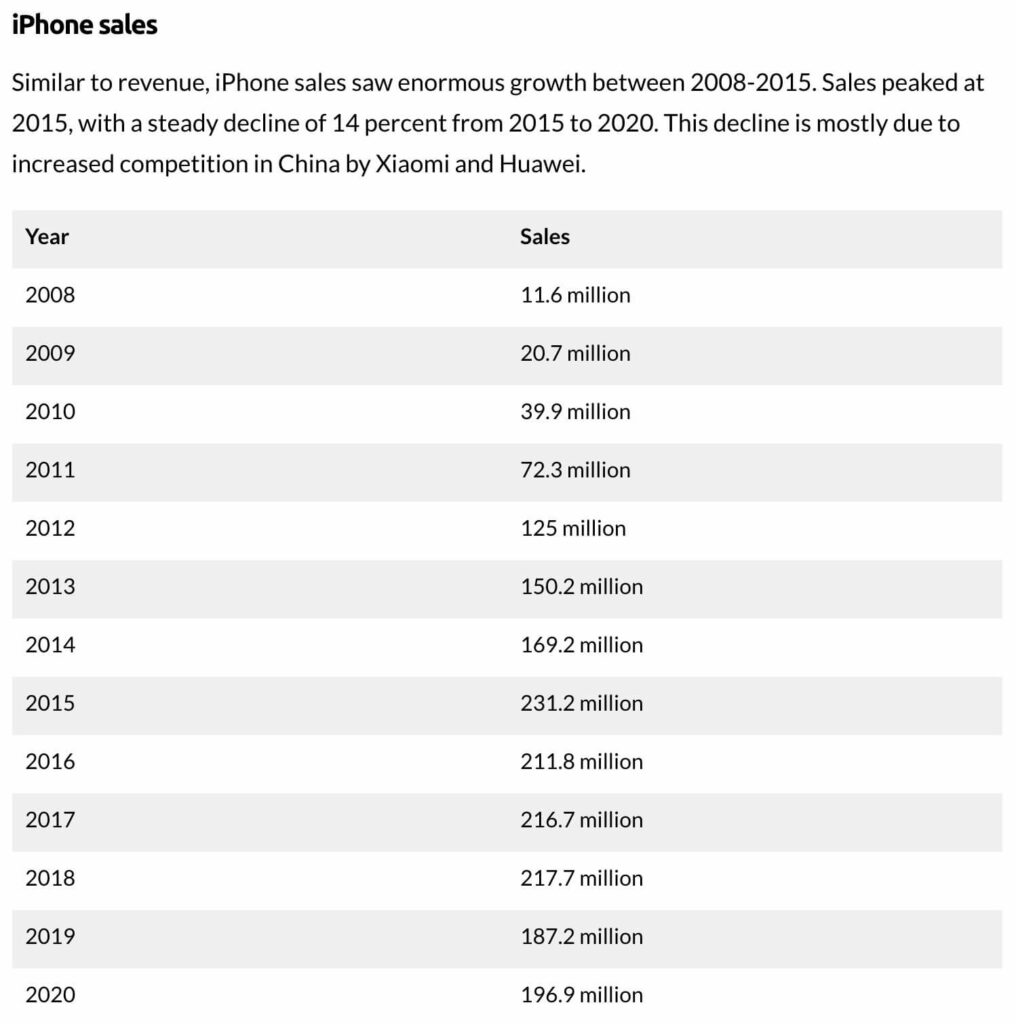 In the third fiscal quarter of 2021, Apple’s iPhone sales were over 48% of the company’s revenues– a monstrous proportion for the company. However, Apple’s iPhone unit sales and revenue have seen a significant fall-off since peaking in 2017-2018. As the diversification efforts continue to slowly blossom, growth-oriented investors and Apple’s leadership share a common desire to see Apple’s YoY financial growth continue. And what better way to do that than create generation after generation of phone that makes some, but not all of the improvements that people want?

This makes a compelling case to innovate only as much as necessary to keep customers returning over time. To drive repeated upgrade cycles, Apple’s strategy seems to increasingly rely on delivering incremental improvements to features like screen resolution, battery life, camera capability, and in this case, omitting important performance boosts like mmWave.

In the U.S., Apple used mmWave to protect its dominant market position. However, for unlucky consumers outside of the U.S., Apple’s strategy means another year of not having the latest wireless technology until the mid-cycle refresh, or possibly until the iPhone 14. Given the company’s extensive global footprint, this means nearly two thirds of its phones won’t have mmWave despite its modest 22% global market share.

Planned obsolescence has been a catalyst of economic activity for ages. Just think of our infrastructure here in the U.S. We all know we can build roads that don’t need to be repaved every year, but we don’t. Apple seems to be following the same suit… only it seems to want people to pave the proverbial road twice a year, even though a much longer-lasting option is available.

Good for investors though, but at some point, doesn’t this behavior of under-delivering on innovation have to hurt its reputation and the support of its consumers? The answer is anything but straightforward. After nearly twenty years of being behind on the newest tech, the iPhone has and will continue to do just fine. But I do believe consumers are getting smarter, the competition is getting better, and Apple poses a risk to itself if it doesn’t think carefully about living up to its reputation as a true leader in product innovation.

5G Will Force Apple to Move Along. Eventually.

5G is here to stay (for at least a decade), and Apple knows it plays a vital role in its future. However, to realize the full promise of 5G, and for Apple’s customers outside the U.S., mmWave may ultimately be an important divide between the haves and have nots. It won’t just mean slightly faster connectivity, but rather, a grossly different experience.

Once again, Apple is biding its time and slow-rolling innovation because it hopes people will come back to the well to buy another phone when it enhances the next one in six months or a year. However, while investors may be well-served by this strategy for the time being, the market will eventually see the truth about Apple and its lagging innovation. Or will it?

The original version of this article was first published on Seeking Alpha.