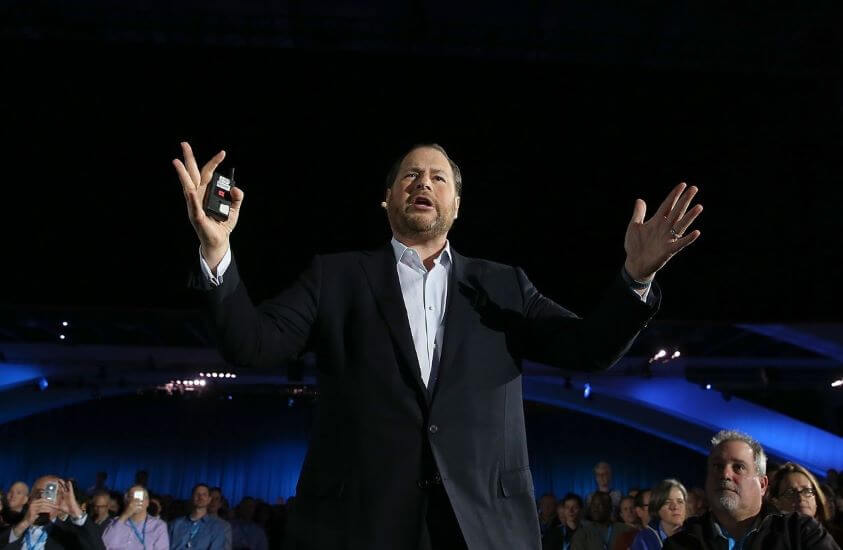 Slack’s shares have surged since the Wall Street Journal reported last week that the work-tools company is in advanced talks to be bought by software giant Salesforce.com.

There has been a wave of semiconductor deals in the past month — NVIDIA/Arm, AMD/Xilinx and Marvell/Inphi. However, there hasn’t been a massive software acquisition since Salesforce CRM, -0.79% itself made its last big move to purchase Tableau, the business-intelligence-software company.

So, just how big of a deal would this be for Salesforce?

It’s important to consider why Salesforce would want to acquire Slack WORK, -0.26%. For nearly a decade, Salesforce has been playing in the enterprise collaboration space. However, it has yet to release a product that really puts it on the map with larger collaboration players including Microsoft MSFT, 0.85%, Cisco CSCO, -0.50% and Google GOOG, -0.02%.

Salesforce’s most notable entry into enterprise collaboration was its Chatter application, which was largely unsuccessful in competing with the growing chat, calling and video tools such as Zoom ZM, -1.34% and Microsoft’s Teams that have been popular during the remote work boom of Covid-19.

Collaboration, though, is much more than just meeting and chat tools; increasingly, collaboration and productivity tools are tightly unified, which has been a catalyst of Microsoft’s growth amid Covid-19 from just over 10 million daily active users to more than 115 million. Google has also been a beneficiary with Google Workspace, its suite of tools that include documents, calendars, presentations and spreadsheets.

Tying all of this together is critical for true enterprise collaboration. Salesforce has also attempted to address this with its 2016 Quip acquisition, giving the company the ability to collaborate on business workflows, sales and customer support.

With Slack in tow, the Salesforce collaboration and productivity suite starts to take shape, offering Salesforce customers choice in the category, and providing greater competition to the likes of Google and Microsoft.

Most certainly, Salesforce is looking at Slack’s current situation as an opportunity to acquire a popular, well-known software; its users mostly revere that during a difficult moment for the company. While Slack was hugely popular heading into its direct listing, the company has failed to keep up with its promise since going public.

Slack’s shares have reflected that relatively sluggish growth, trading at less than $30 before the Wall Street Journal published its exclusive report last week, down from the June 2019 IPO price of around $37. Zoom, by contrast, has more than quadrupled in the same period.

With slowed momentum, and lower acquisition rates than its competitors of the coveted $100,000 monthly recurring customers, there was no clear path to profit, and Microsoft’s momentum only made its outlook worse.

For Salesforce and its CEO, Marc Benioff, this could provide a perfect moment to swoop in and help Slack regain momentum and growth, using Salesforce’s broader ecosystem to lure its users into adopting Slack and, more broadly, its entire enterprise collaboration suite.

Building out the Stack

While this deal will certainly enhance Salesforce’s competitiveness, I do not believe it is the last big move that Salesforce will need to make if it truly seeks to increase its competitiveness as an enterprise platform.

Microsoft, Google and Oracle, which are all staunchly competitive with Salesforce in different aspects, all offer one critical capability that Salesforce does not: A full-stack cloud infrastructure service that acts as the foundation for enterprise digital transformation.

Salesforce still depends on third-party clouds for housing data and building connectivity to vast employee and customer data that lives outside its platform. Even deep integrations with cloud providers that are less directly competitive to Salesforce, such as Amazon’s AWS, don’t necessarily provide it with the same ability to control the entire user/customer experience the way its competitors can by using their own clouds to fully manage and control all data sources inside the organization and beyond.

I think Salesforce will need to fully address the absence of a cloud infrastructure offering to stack up against Microsoft, Google and Oracle. The challenge will be a lack of quick entry options through acquisition, meaning the likely approach for Salesforce would be to build organically and scale by drafting off the larger infrastructure players.

For instance, right now, Salesforce uses preferred cloud relationships for its various apps. AWS for its core CRM, and Azure for its Marketing Cloud. To maximize revenue, and overtime profit, Salesforce would be best served to build its own infrastructure, then scale out using third-party data center hosts such as Equinix to minimize build-out costs but maintain full control of the data and customer environment. This has been the approach of Oracle and IBM, and it wouldn’t be an overnight process.

Still, it would be a critical step to fully compete with those that offer the entire cloud stack of infrastructure, platform and enterprise software. Cloud infrastructure is something that many would never have expected from Salesforce, but it’s potentially its biggest challenge and opportunity to unlock its next level of growth.