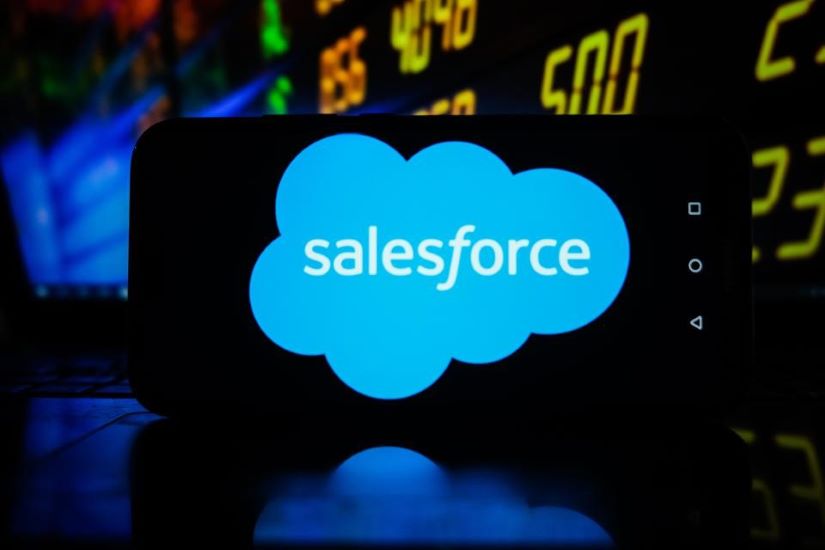 The News: Salesforce reported fiscal third-quarter earnings for the period ending in October on Tuesday, beating Wall Street expectations on earnings and sales.

Salesforce also named current President and COO Bret Taylor to be co-CEO alongside current CEO Marc Benioff. Benioff said in a statement that Taylor would help lead the company through “the next chapter.”

Here’s how the company did versus Refinitiv consensus expectations:

Sales were up 27% from $5.42 billion in the same period a year earlier. The company expects between $7.22 billion and $7.23 billion in revenue in its fiscal fourth quarter, raising its previous guidance, and coming in on par with analyst expectations of $7.22 billion. Read the full news on CNBC.

Analyst Take: The results in the third quarter of its fiscal ’22 represents a continuation of consistent results from Salesforce, which indicates continued strong demand for business applications and the company’s growing platform. 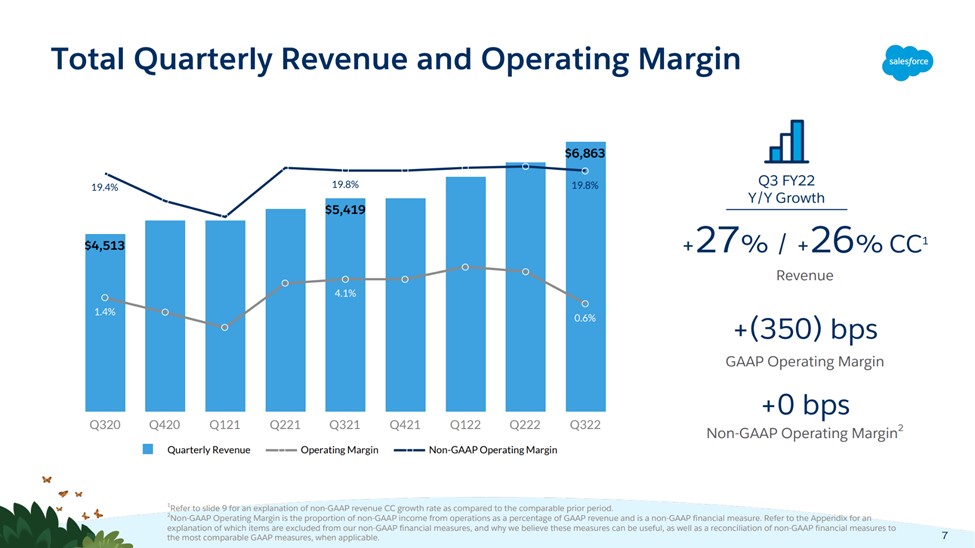 The overall results this quarter showed salesforce delivering 27% revenue growth. This follows a 23% revenue growth during its fiscal second quarter. The company also outperformed EPS, yet the market responded harshly with a strong sell-off after hours that seemed to be fueled by softer earnings guidance in the upcoming quarter as revenue was in line. Of course, the appointment of Bret Taylor as co-CEO was likely met with some strong opinions as does any CEO change. However, I’m fond of the move, and I’ll discuss this more later on. 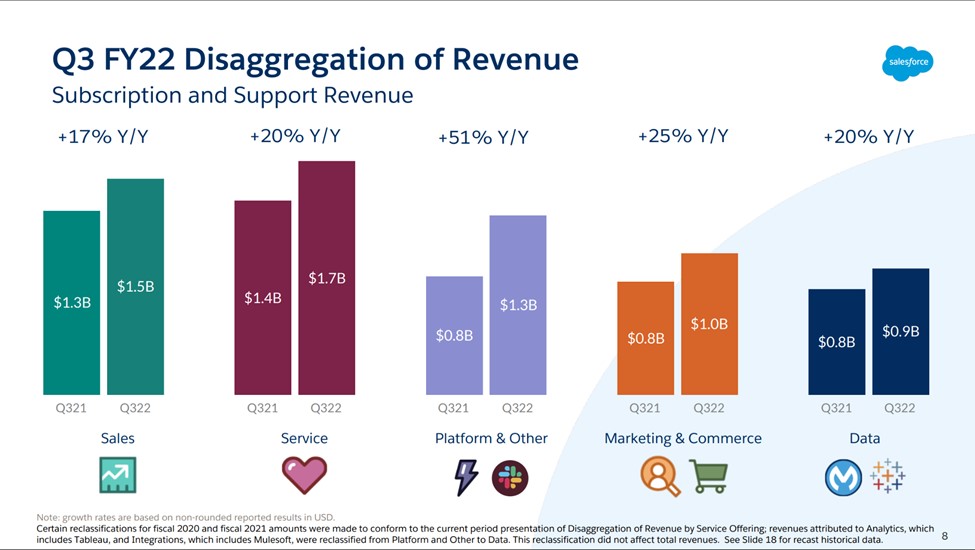 While the Sales and Service Clouds tend to be the best known components of the Salesforce portfolio, the most pronounced growth in the quarter once again came from the Platform and the Marketing & Commerce Cloud. This builds on a multi-quarter trend that has seen these segments grow faster than its core Sales and Service clouds, albeit only slightly. The stable ~20% growth of the company’s Sales and Service clouds should also be seen as great, stable growth for those that may be trying to measure that rate of growth.

The platform saw a reporting change this quarter as MuleSoft and Tableau were extracted to become part of what Salesforce is now labeling as the Data Segment.

I’ve been extremely vocal about the potential in the company’s platform efforts and this new breakout is providing more clarity to the growth of Hyperforce and Slack as a platform versus the big revenue contributions of Tableau and MuleSoft. I like the move, and I do believe this will further exemplify the aggressive growth of the platform. I especially like the Digital HQ narrative as remote and hybrid work continues to be an important story and Salesforce does look to be the most likely competitor to Microsoft Teams for reimagining work based upon asynchronous communications and a digital operating system for communication and knowledge work. It will be interesting to watch this play out and see how far Salesforce goes with its Digital HQ strategy.

Geographic Growth Led by APAC and Europe, But 20%+ in all Regions 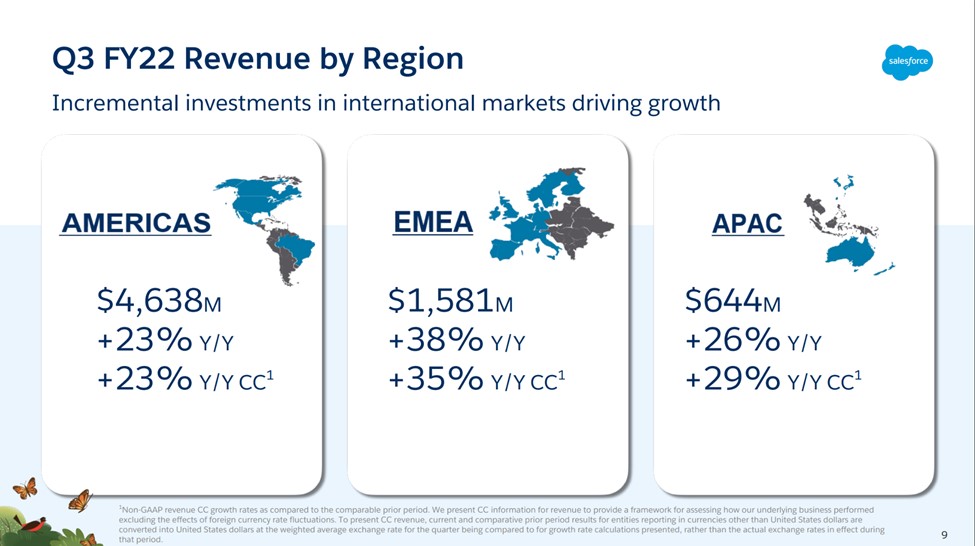 This quarter, Salesforce growth in APAC and EMEA continues to outpace the Americas, but showing steady performance and growth in all regions, I view this as solid growth distribution across regions and I see 20%+ growth as a key metric to sustain throughout the remainder of FY ’22. 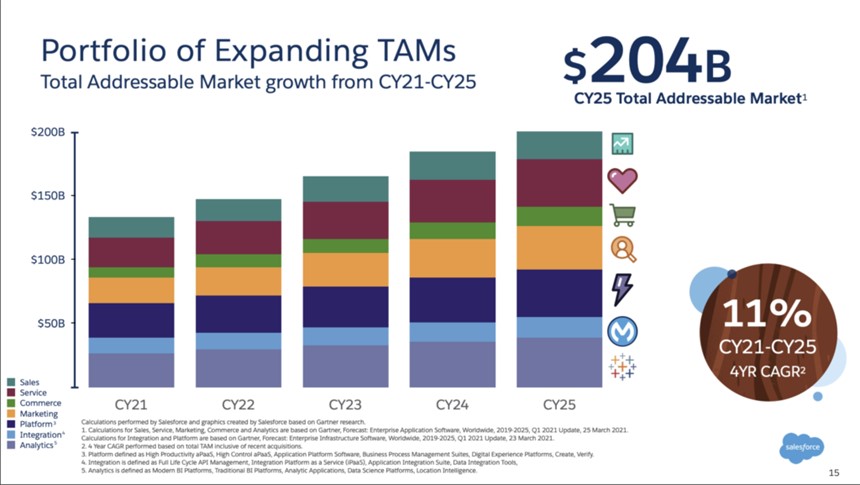 While this chart came from the company’s Q2 ER, I feel it is worth repeating that the multiyear trajectory of the TAM at 11% CAGR provides a promising runway for growth and the company will need this growth to meet its long-term goals. Co-CEO Marc Benioff is continuing to pursue the aggressive target of $35 billion by 2024, which will take sustained growth close to 20% for the next three years to meet that objective. The recent run of YoY growth indicates the company is on track.

Furthermore, I believe the company’s ability to execute on its vision for Digital Headquarters will be at the core of its long term growth along with the company’s big bets in platform and data, which have quickly become its fastest growth segments

There was a lot of attention paid to Bret Taylor’s well deserved promotion to co-CEO. I have long believed this is the path and that he would be the most likely successor to Marc Benioff. It seems we are in a transition phase, but based upon some of the lessons learned from the Keith Block co-CEO experience (good and bad), I’m positive that this will work out better.

Taylor has been doing large portions of this role working closely to CEO Marc Benioff, and there is no doubt that this gradual transition will accelerate over the next one to two years with an outside chance of Taylor becoming “the” CEO in 2022.

A Raise in Guidance

Salesforce guided to 73 –73 cents in adjusted fiscal fourth-quarter earnings per share on $7.22 billion to $7.23 billion in revenue. This meets expected results on the top line for what had been forecasted as Analysts polled by Refinitiv. However, on the EPS side, the company fell short as the street was looking for 82 cents in adjusted earnings per share. The hard sell-off after earnings was likely influenced by this softer than expected, yet still very bullish guidance.

The results and longer term outlook remain positive for Salesforce. The company will need to perform well in a sustained matter to grow at the pace of its ambitions. But as I suggested, integration and growth of its inorganic investments, especially Slack and the vision for digital HQ, will be a catalyst for top line growth.

I continue to be encouraged by the company’s investment and focus on platform and hybrid cloud. There was evidence all over AWS re:Invent of its strong partnership with the cloud giant. This high-growth component of the business remains critical to its longer term growth. In recent quarter’s the company has been more transparent in breaking out MuleSoft and Tableau revenue. This quarter the company also gave insight into Slack’s contribution to the top line, which was $276 million this quarter to the company’s platform segment.

Overall, for Salesforce, it is growth all around. With some big moves in leadership, new reporting segments, and solid growth in legacy and emerging products and services, there is a lot to be encouraged by.