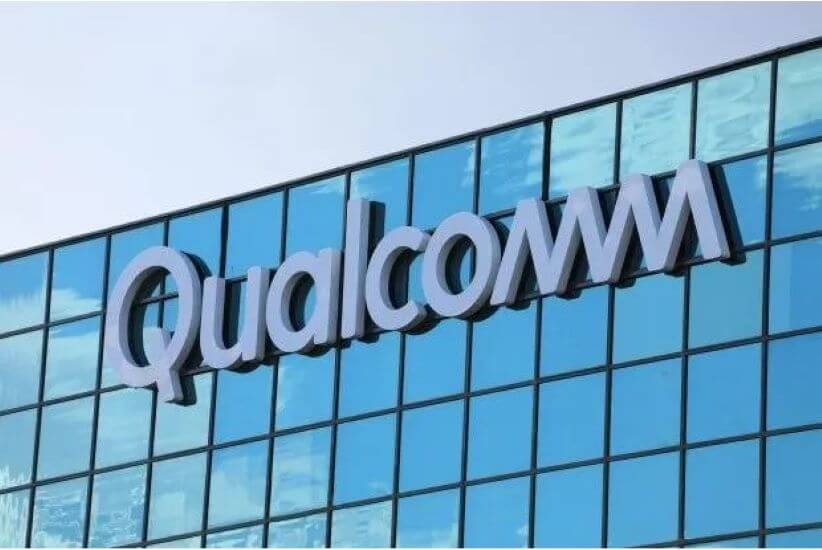 The News: Qualcomm stock rose more than 6% at one point in extended trading Wednesday after the company reported its fiscal fourth-quarter earnings, which exceeded analyst expectations.

Here’s how Qualcomm did versus Refinitiv consensus expectations:

Qualcomm said it expected between $10 billion and $10.8 billion in sales in the current quarter, higher than the $9.68 billion expected by analysts.

Analyst Take: The market responded positively to another strong Qualcomm quarter with the stock rising ~6% AH when the company posted another quarter of outsized top and bottom line growth in Q4.

With supply chain issues on the top of so many investor’s minds, there were a number of bearish indicators that this quarter could be tough for chipmakers like Qualcomm that are highly dependent on chip manufacturers like TSMC. However, Qualcomm proved to be more than ready to face the challenges, and versus others that saw more muted numbers this quarter, Qualcomm clearly had a handle on its supply chain.

On the other hand, Qualcomm is extremely well positioned to benefit from the increase in mobility as the pandemic slows, and the world finds a balance for work, play, learning, and travel. Furthermore, the company’s shift from being primarily known for its handsets to being more diverse gives the company more routes to strong numbers. Only to be buoyed by the overall momentum for mobile devices and 5G, which is core to Qualcomm’s value proposition, but slowly becoming more and more a part rather than the only way the company drives growth.

What requires reiteration from the past few quarters that really needs to get the attention of a greater subset of investors and watchers of Qualcomm is that the company’s tailwinds aren’t only coming from 5G and re-opening, but also the company’s successful diversification efforts that have expanded its TAM significantly in adjacent markets while also gaining strength in its licensing business. More on this in a moment.

While the overall revenue outpaced expectations and the bottom line growth was impressive, perhaps what was most impressive about the company’s Q4 was the growth across so many of its segments both for the quarter and for the year (YoY.) 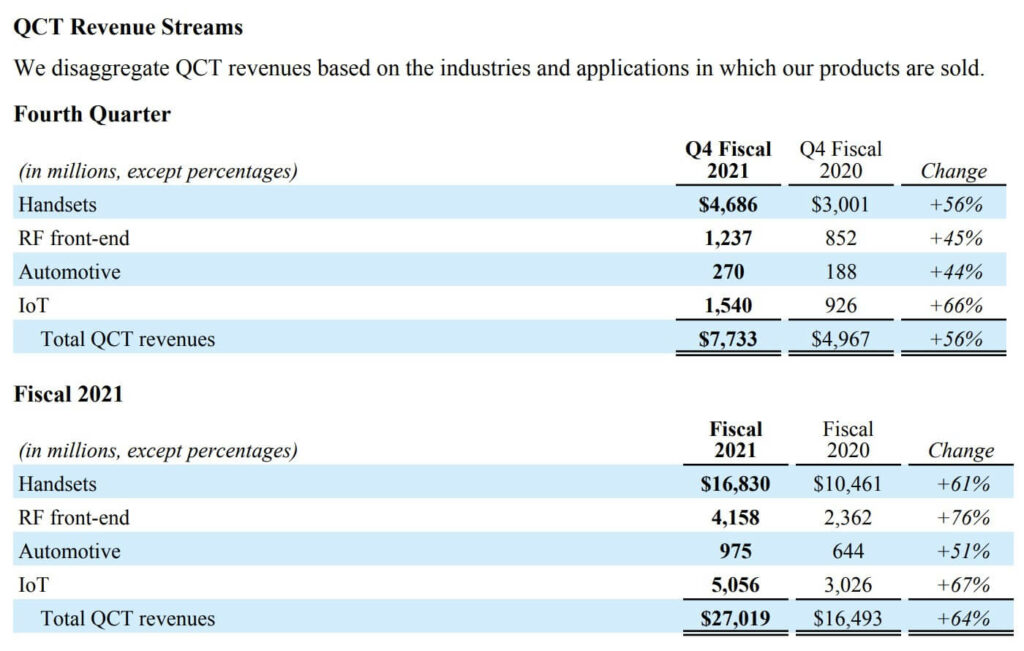 As was clearly seen in every faction of its business, revenue and earnings showed strong year-over-year growth and many of its most significant gains are coming from its growing adjacencies, including IoT, Automotive, and RF Front End. The later three usurped $10 billion in revenue during the fiscal year. Overall, sales were up 43% year-over-year while earnings grew a noteworthy 76%.

Once again, the combination of strong growth in the IoT, Automotive and RF Front End attracted my attention with the significant growth seen in both of these categories. Qualcomm has become the leader in mobile RF Front End, surpassing names like Skyworks, Qorvo, and Broadcom, and saw another significant growth number this quarter with another 76% growth following a triple-digit 114% growth during fiscal Q3. IoT and RFFE are both more than a billion a quarter businesses now, and are aiding in the adjacencies now nearing 40% of QCT revenue.

With EV, Infotainment, and Green Technology garnering so much attention, the company also realized an 51% YoY growth for its automotive business. This quarter can be highlighted by the successful acquisition of Arriver to further advance the Snapdragon platform after Qualcomm made a last minute deal to win the Arriver asset through the acquisition of Veoneer unseating Magna’s original bid for the Swedish Tier 1. I broke this down earlier in the quarter.

With the three adjacent businesses’ growth, this trifecta of non-handset offerings now tracks to comprise more than approximately $3 billion of Qualcomm Technologies (QCT) revenues per quarter proving that the company is well-positioned beyond just handset growth and this part of the business warrants greater attention from those analyzing Qualcomm’s longer-term prospects.

While adjacencies require more attention, it is important to keep an eye on the handset business and the growth–especially as 5G continues to accelerate. Handset growth for Qualcomm remained strong this quarter. On a YoY basis, the company saw its handset business grow by over 56% YoY, coming in at more than $4.68 billion in the fourth quarter. This growth is closely tied to the strength of 5G handsets with more than 500 million units expecting to be shipped in calendar 2021

The quarter’s business is rounded out by its licensing revenue, which came in at $1.56 billion, representing a modest 3% growth, whereas the business did grow 26% YoY on the top line delivering over $6.3 billion. The licensing business remains healthy and profitable and the business has been able to focus on growth as many of its legal and regulatory woes have subsided over the past few quarters, leaving the business model intact and the revenue attachments across its IP portfolio stable. Licensing updates were minor this quarter, but over the last two quarters the company saw its licensee number rise to 150 5G licensing agreements, up from around 130 last quarter. Building on strong growth during the second fiscal quarter where the company was able to claim licensing agreements with every major global handset maker.

Analysts had predicted a strong YoY result, but the company actually ran well beyond what was expected which shouldn’t surprise investors, but really is an indicator of the strength of Qualcomm’s business and the growing demand for its core and adjacent businesses.
The growth of 5G shouldn’t surprise anyone, but, I must reiterate that the success in its business adjacencies is a clear reason for a more bullish sentiment around Qualcomm’s prospects.

The guidance set for FY ‘22 Q1 looks set to continue the company’s sustained YoY growth leaving a lot to be positive about from the overall Qualcomm results delivered during the second quarter.

Qualcomm Partners with Nothing to Power Device Innovation