The News: The worldwide PC market grew 4.7 percent in the third quarter of 2019 to 70.9 million units, the highest growth for the sector since the first quarter of 2012, according to a Thursday report by Canalys.

Lenovo and HP ranked first and second, with the former shipping 17.3 million units and the latter 16.7 million units. Dell came in third place, shipping 12.1 million PCs in the third quarter. Apple landed in fourth place with 5.4 million shipments, and Acer in fifth with 4.9 million. Read the full news on CNET. 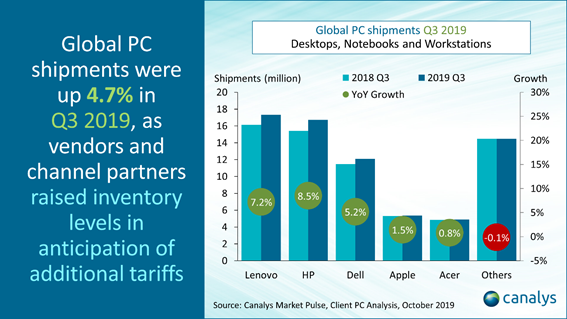 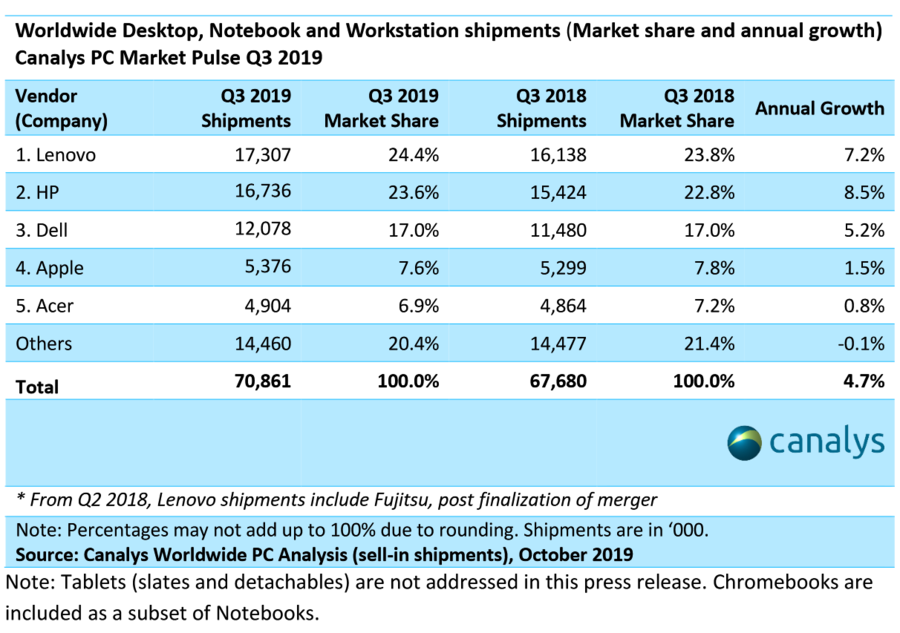 Analyst Take: Over the past few years (Read: Decade), the emergence of mobile devices, tablets and phablets have let to a glut of claims that the PC’s lifespan was coming to an end.

Over the past few years, the sales growth hasn’t been outstanding, but the category has hardly been falling. Some of the short-term declines in PC sales could easily be attributed to an ongoing chip shortage that has plagued the industry. Other factors include the significant performance and quality improvements that have led to consumers being able to use PC’s for a longer period of time and enterprises being able to slow refresh cycles that can lead to significant single quarter volumes.

It’s also worth noting that the newest generation of Windows is a significantly better experience than versions of yesteryear; all of which is making the PC more compelling. Still yet Chrome Books have done well in education and have helped flesh out a new category of low cost, simple to use machines that btw, our youth are growing up on and may be inclined to utilize as they cross into professional careers.

A few of the trends that are driving the growth of PC’s are the more common 2 in 1, which started with the Lenovo Yoga. People like the tablet and PC function in a single device.

I’m also bullish on Always Connected PC’s (ACPC), which are going to become a more common feature in new machines. This feature entails LTE or eventually 5G so that the PC is connected like our mobile devices.

The architecture that is building these faster, easier to use, connected PC’s is also leading to longer battery life. We are seeing 12 to 18 hours of use far more common. That has come from improved chip architecture via Intel, AMD and ARM. Having a device that is always connected at high speed and lasts 18 hours is appealing, and the pricing has continued to make these types of devices affordable.

Workstations are a bit of a dark horse here, but they contribute units for gamers and higher demand applications that require a lot of horsepower. These certainly contribute to the overall numbers.

Recently Microsoft added to its line of PC’s with the new Surface Pro X and updates to its Laptop 3 and Surface 7 lines. I wouldn’t be at all surprised to See Microsoft move beyond other and into the top five within the next 24 months.

The data pretty much speaks for itself. PC’s saw a big jump in year over year shipments and the growth is coming specifically from the big PC manufacturers while Apple isn’t seeing the same kind of growth and smaller players are also not contributing significantly.

Lenovo, HP and Dell have vastly improved their delivery of high quality devices and with the emergence of the 2 in 1 (as noted above), Always Connected PCs and of course much better battery performance. I firmly believe the big three are well positioned to stabilize performance and continue to benefit from the need for more capable PC’s, which mobile devices and foldables won’t be able to address.

Positive data here, good for the industry and the economy to see PC sales growing.