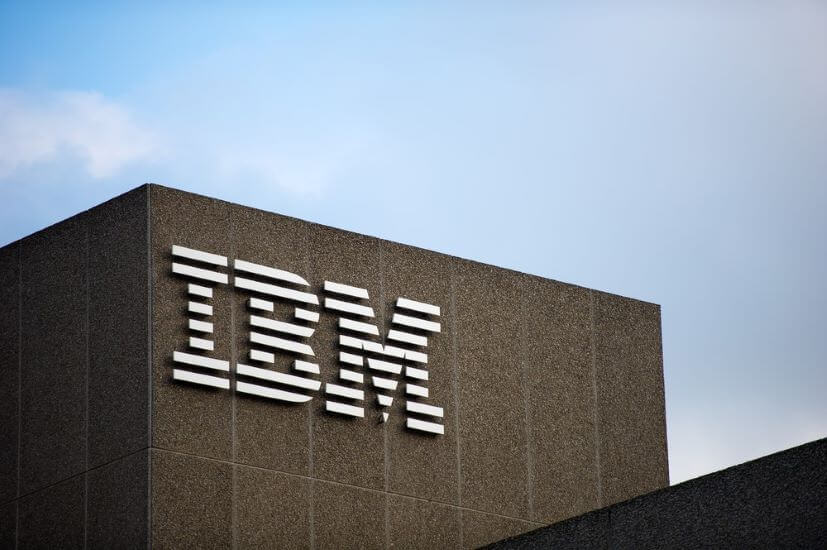 The News: IBM shares rose 4% in extended trading on Monday after the enterprise technology and services maker reported first-quarter earnings that came in better than analysts had expected.

Revenue grew by 0.9% on an annualized basis in the quarter, compared with a 6% decrease in the prior quarter, according to a statement. The company reiterated previous guidance of revenue growth for the full year. Read the full news item on CNBC. 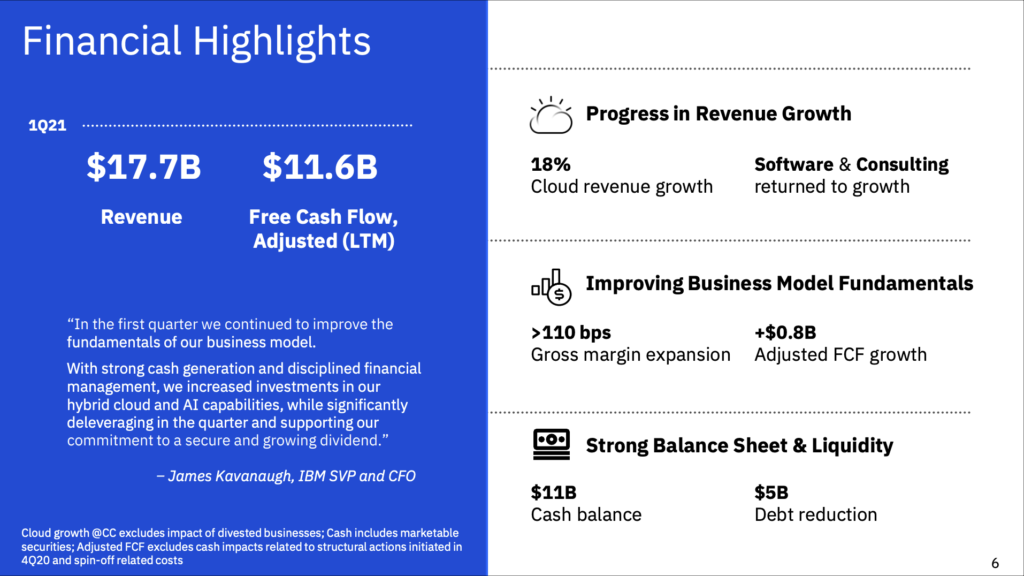 Analyst Take: The second wave of tech earnings for 2021 is starting to hit, and IBM was first on deck, sharing its results for the first quarter of their 2021 fiscal. IBM saw its share price jump in the wake of its announcement as the street was encouraged by its reversal of a four consecutive quarter slide of declining revenues. The company had some strong performances that could definitely be noted  in yielding this result with its cloud business and Red Hat acting as a couple of bright spots, while strengthening profit margins were also a factor in leading the company to a better than expected bottom-line result, beating estimates by $.14 per share.

In short, revenues looked much better than in the company’s fiscal ’20 Q4. Systems is a very cyclical business; softer revenue in that area can be explained away somewhat quickly. GTS was down 5%, but it’s worth noting that this part of the business will be exiting the IBM portfolio with the spin-off of “Kyndryl,” which is an area that has a big impact on revenue but should be easy to look beyond. GBS missed by the narrowest of margins, at 1% but continues to be an overall solid performer. The strongest segments were the Cloud and Cognitive segment that saw a 1% YoY increase, and the IBM Systems business, which came in at 2% YoY. Neither were massive growth results, but the first step to returning to growth is getting your biggest segments growing, and then accelerating that growth.

A few notable, and impressive results were the pure cloud growth that came from Cloud and Cognitive at 34% and the 49% growth to IBM Z that propped up the overall system number to growth for the quarter.

As a whole, the growth/decline revenue story has dominated headlines for IBM for a prolonged period of time and has become a catch-all to some extent for investor disdain. Any quarter where growth is reached, there is a more bullish sentiment, but I’m sure larger growth numbers are being sought by the company’s most outspoken critics. It’s worth noting that the revenue stagnation issue long precedes CEO Arvind Krishna’s appointment. I also believe there is a more positive story bubbling up within IBM. This story is about cloud and specifically targets hybrid architecture and enterprise needs. I feel that 2021 will be a pivotal year for the company to show that its transformation is working–This will be notable in the quarters that follow the spin-off, and seeing continued strong results from the cloud business.

Hybrid Cloud Continues to be The Focal Point

IBM has been pretty outspoken about its pivot to cloud. This pivot is core to the decision to spin-off its massive managed infrastructure businesses unit, recently named Kyndryl, to provide the company more resources to focus on the promise of Cloud, and hybrid cloud in particular.

The $34 billion Red Hat acquisition, despite some concern for the overall price tag, continues to be the brightest light within IBM, and this quarter didn’t disappoint. While the larger Cloud and Cognitive business missed the mark, the Red Hat performance stayed solid with double-digit growth of 17%. This is in the ballpark of recent quarters where Red Hat has maintained this level, or even a slightly higher level of growth, and continues to reflect a strong future for this area of IBM’s business. This result continues to validate the hefty price tag associated with Red Hat, which faced scrutiny when it was announced.

In short, it seems that the Red Hat deal is working, and IBM has a route to growth by putting more emphasis there. With growing strength in hybrid will come greater volumes of services, and it will lead to more opportunity in its GBS unit as well as opportunities tied to the emergence of enterprise AI at scale. Beyond Red Hat, the company is also doing some good things around vertical focus clouds like its financial services cloud offering, as well as its Cloud Satellites offering, which is out to improve the control plane experience for hybrid and multi-cloud deployments. We are also quite bullish on the company’s commitment around Confidential Computing, which will gain momentum as more attention is being given to securing data in all states–especially when applications are in use.

I’m also still seeing positive long term prospects in systems, this quarter we saw the impact that the next generation Z15 had. I’m also continuing to monitor the company’s Quantum portfolio and its unique offerings built around Blockchain. I view both of those businesses as more speculative in nature, but they carry significant upside potential.

Overall, I want to see the Cloud and Cognitive business push toward double-digit growth. This is a key metric to watch for, especially as “Kyndryl’s” divestiture is finalized and the company can pour its resources and focus into building around its cloud business. It would also be good to get a bit more pure cloud revenue disclosures as the company’s cloud and cognitive services number is a bit overpacked, and it would be great to understand the revenue that entails the 34% “Cloud” growth that was shared in the earnings slide.  As I see it, cloud growth will be the key storyline to watch for the remainder of the year for IBM. I’m cautiously optimistic that we are in the early days of a growth cycle for IBM, with almost certain growth in its focus areas, which is what I want to see in the coming quarters.