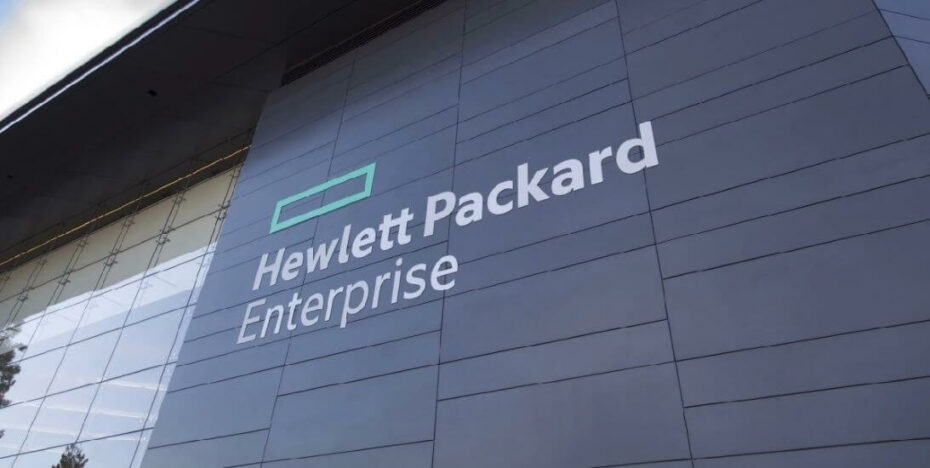 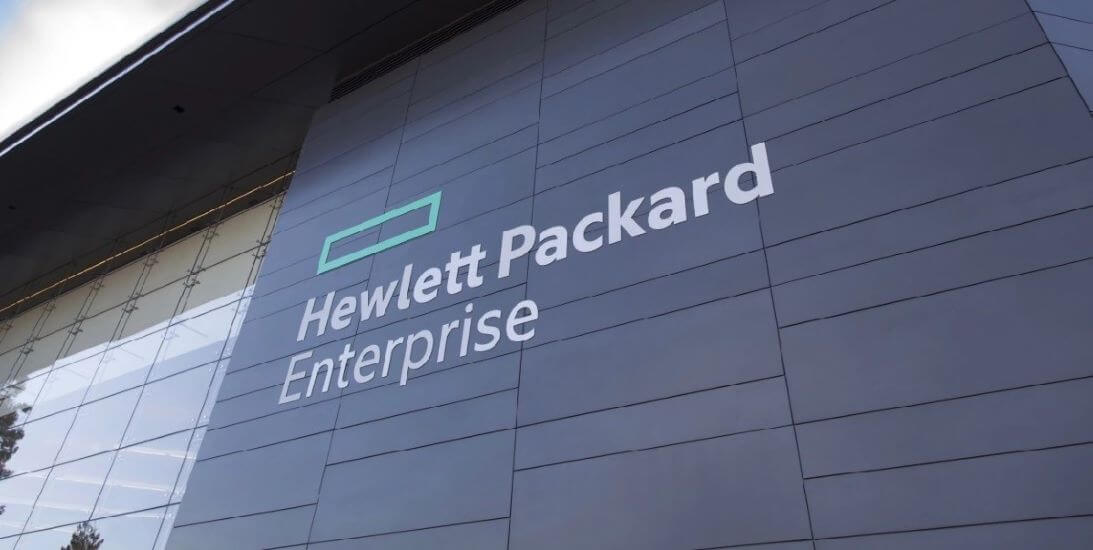 The News: Hewlett Packard Enterprise (HPE) released earnings results for Q4 FY21 and FY21 as a whole. Overall, the quarter was marked by strengthening demand across all segments, improved profitability, and structural gross margin improvements. Read the full earnings release in the HPE newsroom.

Here’s a quick breakdown of the headline numbers:

Analyst Take: The fourth and final quarter of HPE’s FY21 (the company’s year end is October 31st ) marked another solid result for HPE, with net revenue of $7.4 billion sequentially and up 0.4% from the prior year period. Against the strong headwinds of both chip shortages and the other parts supply issues brought about by the pandemic, this is an impressive set of numbers from the industry stalwart.

Hot on the heels of the recent blow-out quarter from Dell Technologies and given the relative portfolio similarities between the two companies, I was interested to see HPE’s numbers. While HPE certainly did not disappoint, especially in ARR growth from GreenLake where the company posted a 36% YoY increase, the overall numbers were not as large as those posted by Dell Technologies.

But HPE’s transformation, pivoting from a CapEx heavy customer spend to a more ARR focused model, is a work in progress — and that’s important to factor in here. I recently interviewed HPE CEO Antonio Neri on the multi-year transformation he and his leadership team are undertaking, where every HPE offering is delivered as an as a Service model, and I must continue to reiterate that it’s not only a smart move, but the right move. That said, this pivot is one will take some time to effectuate, and the company has indicated a targeted completion date of year-end 2023. However, the 36% YoY increase and the fact that ARR is closing in on a $1 billion run rate is not only encouraging, but also speaks to the investments the company is making at every level to pivot a decades-old model. The fact that the company is stating that as a Service orders have grown 114% YoY is also a strong lead indicator that the company will continue to see strong ARR growth in coming quarters.

The pivot to ARR as a key metric is vital to reposition HPE in the minds of investors as they look to see cloud-like metrics upon which they can form relative comparisons. I like that the company continues to break out this metric and give such solid guidance of 35 to 45% CAGR through 2024. This number will be important to revisit in coming quarters. 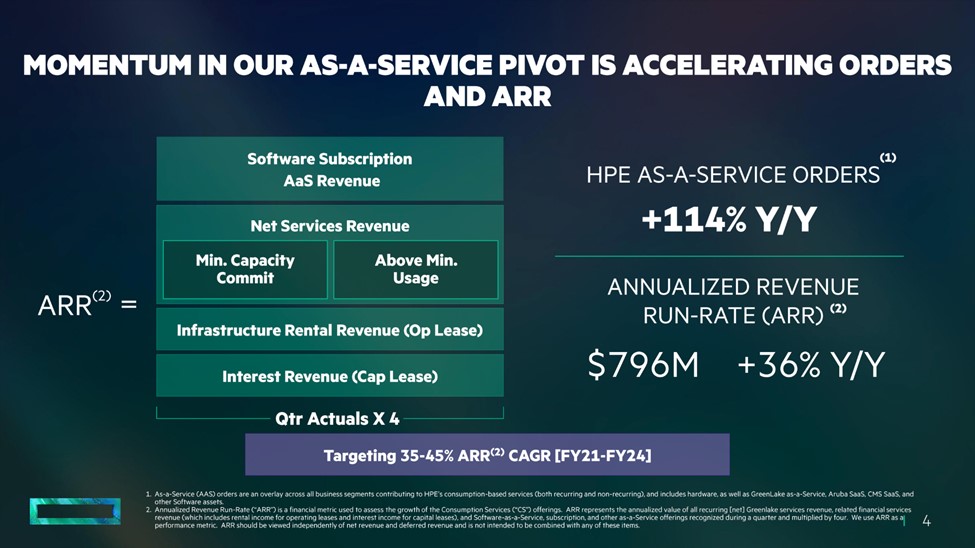 The early pivot that HPE has made to XaaS is starting to pay dividends. The $796 million annualized run rate compares well against what we’re seeing from the likes of Snowflake, who reported $254.6m of product revenue in their latest earnings announcement.

Every quarter as the company announces earnings, the ARR and XaaS numbers are the first ones to catch my eye as the company’s ability to continue to deliver on this metric is paramount to how I value the company’s strategic executions. It also gives a lead indicator to the company’s market perception.

For a quick look at HPE’s segment revenue breakdown, here’s a chart from the earnings report: 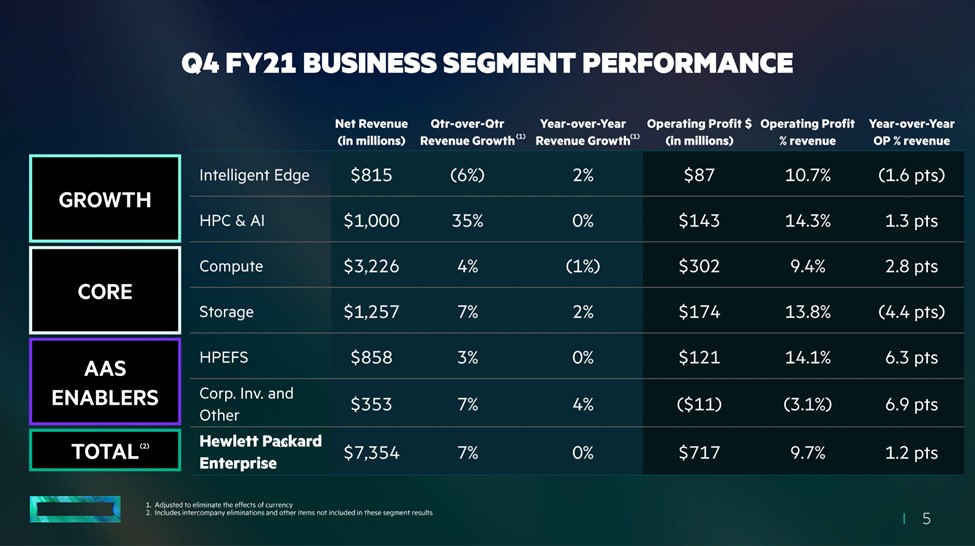 HPE delivered on an annualized basis across every segment apart from compute, which was down 1%. In Q4, only Intelligent Edge saw a quarter-on-quarter decline of 6% after posting solid numbers the previous quarter and being up 2% overall for the year. HPC had a bounce back quarter with a 35% quarter-on-quarter growth which, compared with the tough numbers in the previous quarter, highlights how the HPC space is notoriously lumpy revenue wise despite HPE’s best efforts to pivot this market segment to an aaS approach. Other things to note:

The strong storage numbers are interesting given the industry narrative of a trend toward storage in the public cloud. One particularly interesting nugget was that all flash Arrays grew 7% from the prior year period, which was led by Primera offerings. Also encouraging was the notable strength in software-defined solutions, including Nimble, up 4% from the prior-year period with strong momentum in dHCI growing double-digits. I will be watching this metric closely in future earnings statements as HPE is either bucking the trend or the trend is overstated.

Looking beyond the earnings report, this set of annual numbers by HPE is impressive, especially considering the supply chain challenges the company has faced, particularly in the semiconductor space. I was encouraged to see balanced growth spread across all business units for the year, with only the compute numbers preventing a clean sweep of growth across all segments for the year.

My bullish posture on the strategy that Neri is executing to move the company to everything as a Service (XaaS) remains and the first mover advantage amongst the company’s peer group of hardware OEMs appears to be proving to be lasting.

HPE continues to be a bellwether of the infrastructure business and the harsh comparison the equities analysts seem to want to perpetuate against stock market darlings such as Snowflake doesn’t give the company the credit it deserves, especially when you consider ARR is closing in on $1 billion annually. HPE is exposed to a significant TAM and is well positioned to address the key requirements that face the modern C-Suite, be they core infrastructure, AI, or edge computing.

The multi-year retooling that Neri is driving at HPE is hard to see reflected in quarterly earnings and must be viewed over a longer time horizon. I believe these numbers provide a strong indicator that HPE is on the right course, and when reviewed in the context of a multi-year strategy, these numbers provide strong corroboration that the company is on the right track. HPE continues to invest to accelerate the pivot to XaaS and the fruits of these investments is starting to create a flywheel effect that I expect to pay further dividends in the quarters, years, and decades ahead.