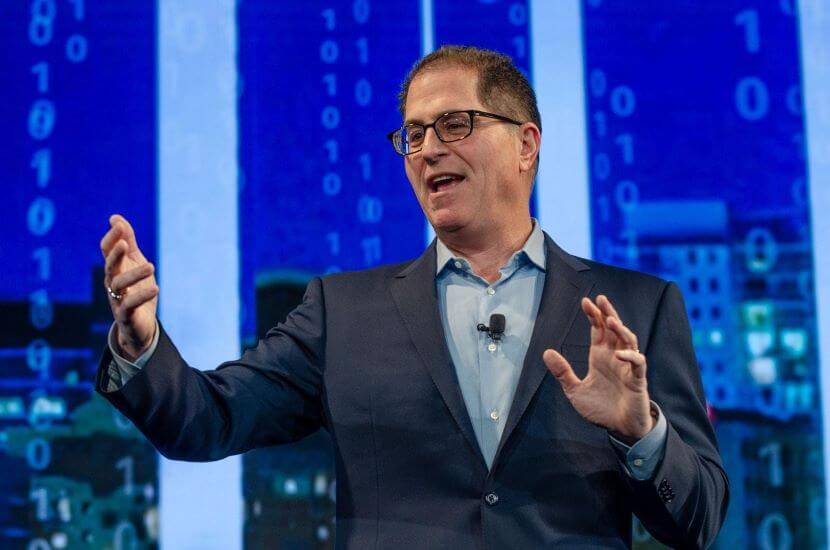 The News: Dell Technologies (NYSE:DELL) announces the planned spin-off of its 81% equity ownership interest in VMware (NYSE:VMW). The transaction will result in two standalone companies positioned for growth in the data era. The transaction is expected to close during the fourth quarter of calendar 2021, subject to certain conditions, including receipt of a favorable IRS private letter ruling and an opinion that the transaction will qualify as generally tax-free for Dell Technologies shareholders for U.S. federal income tax purposes. Read the full release in Dell’s newsroom. 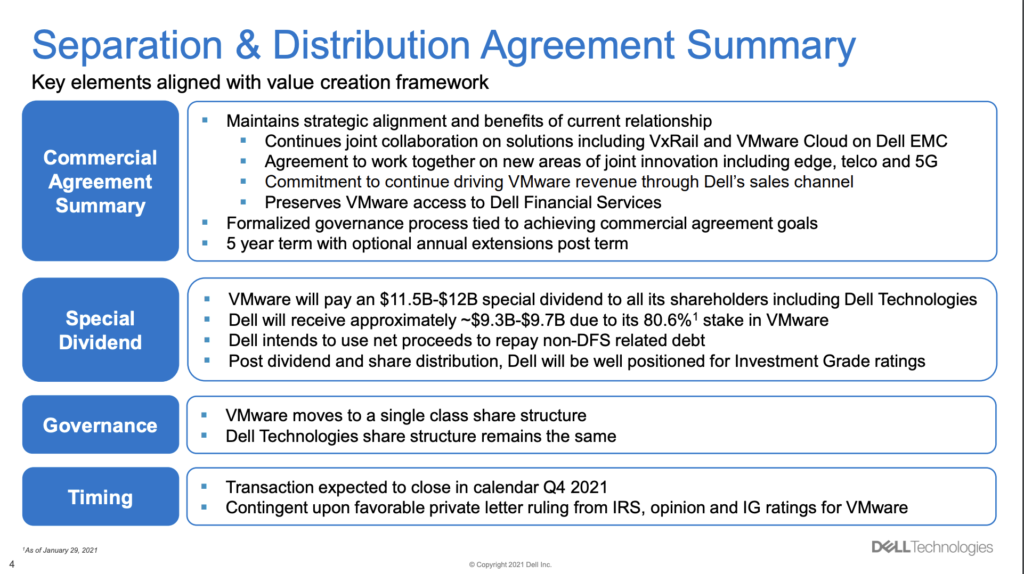 Analyst Take: Dell’s decision to spin off VMware has been long in discussion, and it seems to have come to a head. The street has met it with a positive reaction sending the stock up more than 5% in the after-hours session following the news. The deal appears to have a significant upside, without many negatives for either company or its shareholders. For this research note, I look at the impact to both companies and provide a brief overall assessment of the deal.

What This Means for Dell: Outlook and Challenges

Dell is making this move at an opportune moment. The company weathered Covid-19, which was much tougher on large infrastructure OEMs, which is a big part of Dell’s business. Strong PC sales offset that, but also, the company is in transition, building out as-a-service models that will help its customers move to the cloud. VMware has been a bridge to the cloud for Dell, but in terms of go-to-market, this spin-off is unlikely to change that. What does change is the company improves its balance sheet and debt situation while unlocking value that was tied up in the existing cap structure. This means a good moment for shareholders, and concurrently it helps Dell return to investment grade. The biggest challenge I see the company facing is those that will say this weakens the company’s position in cloud as VMware played an essential role in its cloud strategy. I believe Dell has tied up its offering with VMware, and if anything, this gives more latitude to expand partnerships while continuing to draft off of what was already built.

What about VMware? What it Means for the Company Going Forward + CEO Transition

VMware has long acted with autonomy. This moment will provide a good outcome for its investors, but the continued go-to market shouldn’t change much. VMware has done a good job of positioning itself across the ecosystem to help companies deal with hybrid and multi-cloud complexities. Their growth has been consistently around 10%, and there is little to indicate a slow down with the rapid growth of cloud and the demand for hybrid solutions. The Dell team long served as a sales engine for VMware, but the deal doesn’t indicate any change with that particular strategy. I see little downside for VMware so long as the partnership remains strong, as suggested by the companies during this transition.

Also, it is worth discussing the CEO transition that is going on at VMware. After Pat Gelsinger’s departure, VMware has appointed an interim CEO, Zane Rowe, which appears likely to be a temporary appointment. This, of course, is an inflection point, and bringing in a new leader is essential. Michael Dell remains chairman of the board for VMware until this transaction is complete, and I believe MD and his BOD will be more than adequately equipped to navigate the appointment and find the right leader for the company post-spin-off. It’s too soon to confirm if Mr. Rowe could be the right appointment, but I’m sure he will be given a look among other potential candidates–However, it is clear they are exploring their options.

I’ve been pretty confident that this would happen since the original filing of the 13D. There was enormous value to unlock for both Dell and shareholders by completing this deal, and the street didn’t value it as much as it likely should have. With deep partnership plans in place, the material changes in go to market are small, but the benefits mentioned above and the tax benefit of this deal are too good of a deal for Michael Dell and the board to pass up.