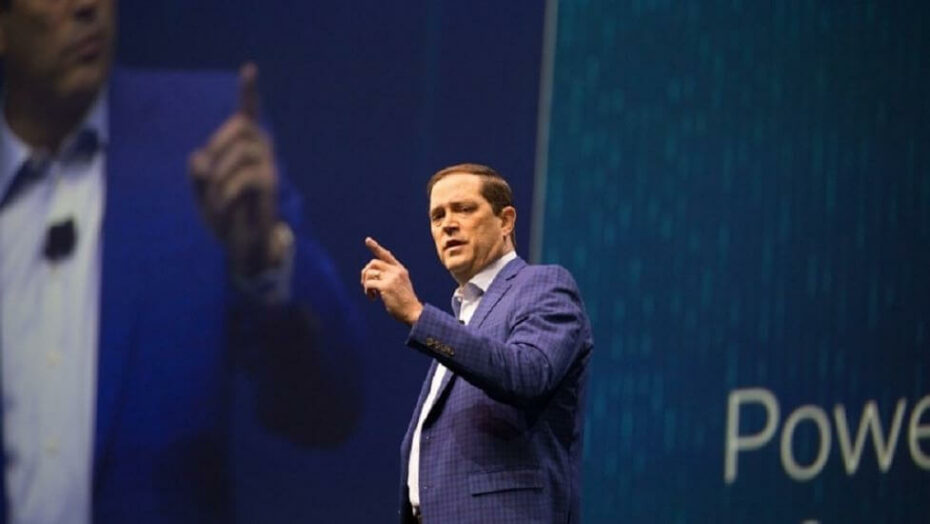 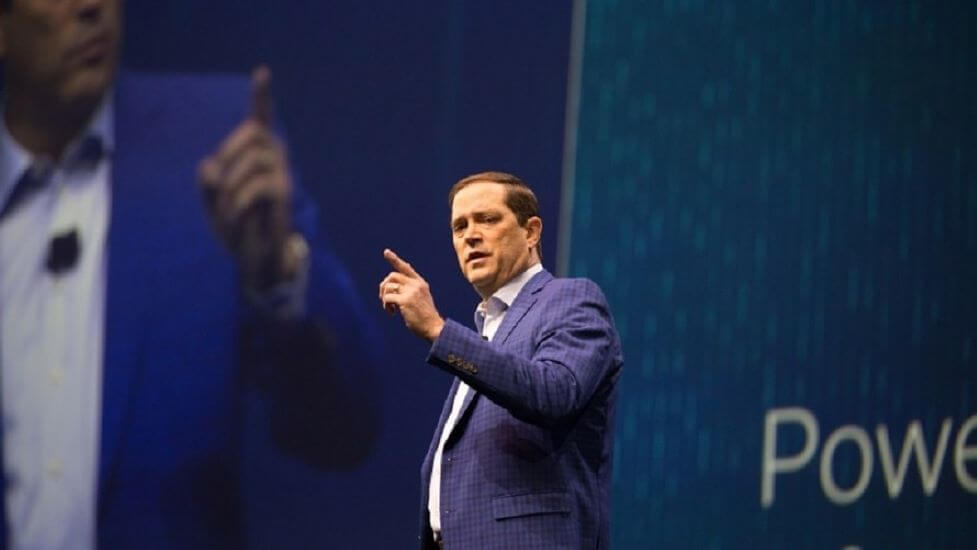 The News: Cisco shares moved slightly lower in extended trading on Wednesday after the  company reported earnings that exceeded analysts’ expectations and show a strong return to growth.

Cisco is on a roll, posting the second quarter of growth after what was a 5-quarter streak of revenue declines previously, posting nearly 8% growth year over year. Read the full news story on CNBC. 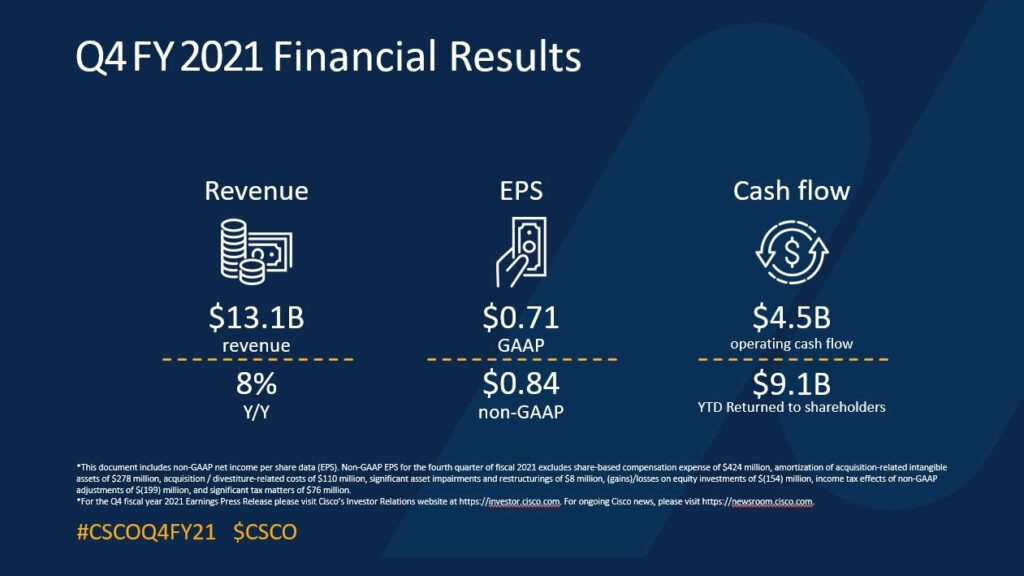 Analyst Take: Cisco is trending in the right direction after posting a solid set of Q4 numbers that show a continuation of the trend seen last quarter where the reversed the fortunes of the five preceding quarters. The company continues to see supply constraint challenges through at least the first half of the company’s fiscal year and beyond.  With this in mind, the company announced an increase in prices for some products citing supply chain challenges and cost impacts as the rationale. I am not surprised by decision from Cisco’s leadership, and I don’t think Cisco clients will be either. Additionally, I don’t envisage this price move having a material impact on the short or medium term performance of the company as prices across many categories are rising due to supply and inflationary concerns.

The Infrastructure Platforms segment, which delivers most of Cisco’s revenue, delivered $7.55 billion in sales. That number represents 13% growth YoY and more than the $7.11 billion that analysts had expected, according to StreetAccount. This segment is a key indicator for me, as it represents sales of core ethernet switches and routers for data centers and indicates how strongly Cisco is positioned in the rapidly growing cloud and hyperscaler segment.

Again, I see this quarter’s result as a continuation of a positive trend upwards.

Cisco continues to be well positioned to align with key industry, secular, and macro trends such as hybrid and remote work, cloud based consumption services, cybersecurity, ITops,  5G adoption and much more. If the company is to continue the trend of this quarter and the last it must continue to stay resolutely focused on execution while pivoting the business from a traditional cap-ex intensive model to an Annual Recurring Revenue model which is led more by software.

Strength in the Infrastructure Segment and Regions, But Application Business Declines 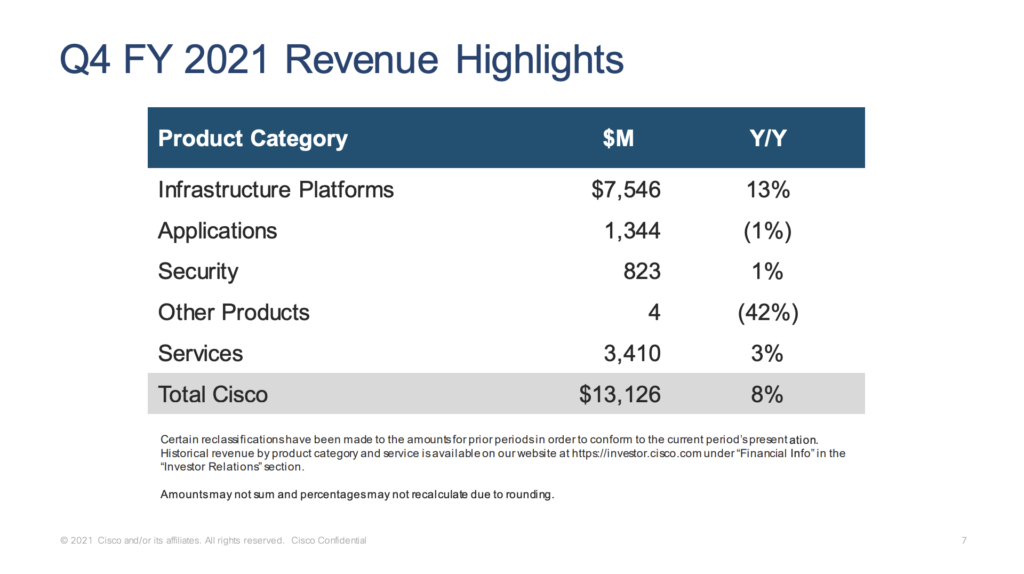 Geographically,  this quarter saw APJC as the fastest growing market for the company, although the pace of growth did slow from 19% to 13% based on last quarters numbers. Europe’s growth was modest with the region posting a 6% increase this quarter which compares to 11% last quarter. Americas was the stand out performer growing at 8% which is a 6 percentage point jump from the 2% growth posted last quarter. 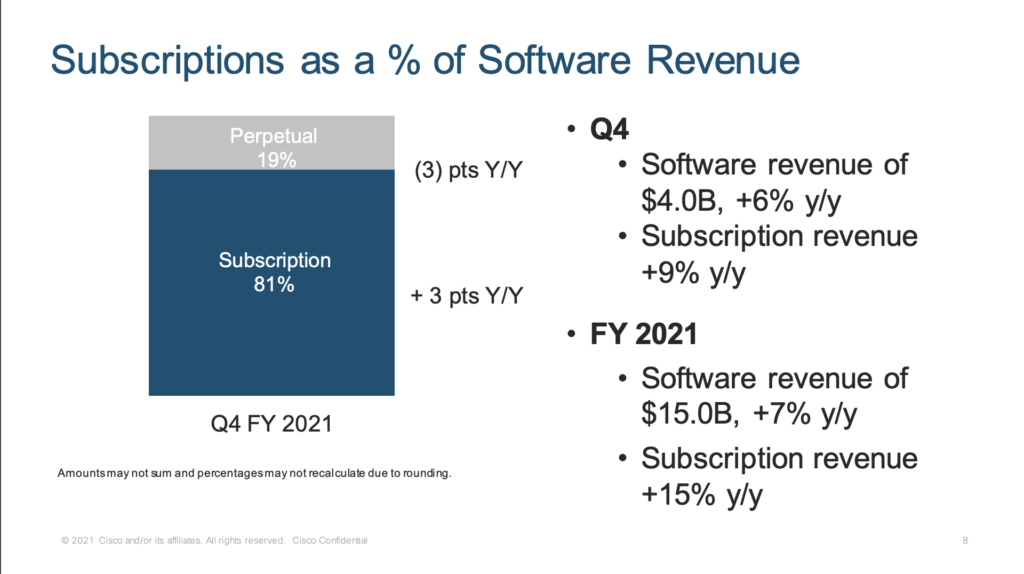 Perhaps the most interesting data point to come out of the earnings call was Cisco reaching $4 billion in software revenue this quarter. On an annualized basis, this puts Cisco among the largest software companies in the world, and this is a point often missed by analysts and pundits. Cisco is transitioning to software and ARR successfully, and this adds to its long term viability for growth and should provide investors a greater sense of stability.

During the quarter Cisco acquired the following privately held companies:

The acquisitions closed this quarter signal Cisco’s strategic intent, as the company looks to pivot away from its core business as a network hardware vendor with a CapEx heavy model to s software and applications focus where revenues are more predictable and recurring. As the company makes this pivot to a focus on ARR and less on networking hardware it will be key for the company to retain the bedrock of its business and see the applications business as additive if growth at the overall top-line is to continue.

Furthermore, I continue to be impressed by Cisco’s methodical acquisition strategy, which largely has been about adding subtle, incremental solutions to improve its core technology offerings. Integration of acquisitions has seemingly happened with good efficiency, leading to likely improvements in revenue, and customer across the portfolio. This analysis is largely speculative as the accretive adds from these acquisitions is rarely, if ever disclosed due to most of these deals being small in nature.

Guidance Largely in Line with the Streets expectations

Cisco is issuing guidance in the 79 cents to 81 cents range for  adjusted fiscal first-quarter earnings and revenue growth of 7.5% to 9.5%. The street was expecting 81 cents in adjusted earnings per share on $12.84 billion in revenue, which would imply a 7.7% revenue growth.

One factor of note was a narrowing of the  company’s adjusted gross margin.  The numbers here are trending down and will likely narrow to about 63.8% in the fiscal first quarter, from 65.5% in the fiscal fourth quarter.  This is becoming a trend and one I will be watching as this is now the second quarter where  the extra costs related to supply constraints are having an impact.

Cisco did also issue guidance for the full 2022 fiscal year, which represents  a break from tradition. The company called $3.38 to $3.45 in adjusted earnings per share and 5% to 7% revenue growth. These EPS numbers were in line with the analyst consensus of expected adjusted earnings of $3.41 per share.  The revenue growth numbers projected by the company were slightly higher than the sentiment on the Street where the consensus was more like 4% growth. I see this as encouraging overall guidance for the new fiscal year.

Excluding the now normal after market close dip following positive earnings results Cisco stock is up approximately 24% since the beginning of the calendar year, however this performance trails the S&P 500 index that has grown by 30% over the same period.  Cisco, like many of the larger IT OEM and Infrastructure providers saw a slower return to growth, but has been in catch up mode the past few quarters.

This quarter continues a strong turnaround and represents a solid second quarter of growth for the company.  While 8% YoY growth may not excite those who actively track the hyperscalers, such as AWS and Microsoft, the continued strength of Cisco as a bell-weather in the OEM supplier space means I remain bullish on the sector as a whole.

Cisco will need to remain laser focused on strong execution and operational issues to combat the headwinds from supply challenges and price increases, and I will be tracking the overall profit margin closely to see how the company performs on this key KPI in the coming quarters.

Q4 and FY2021 overall marked a return to form and outlook for Cisco, and bodes well for other industry stalwarts such as HPE, Dell and IBM in the coming months.