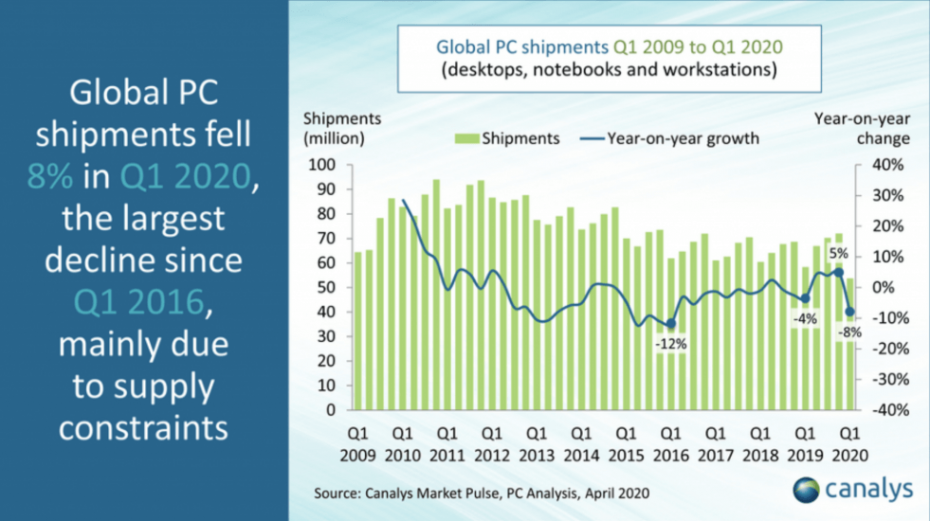 The News: Demand for PCs soared in Q1 2020, driven by remote working and learning requirements from strict lockdown measures around the world. But the crisis also caused severe delays in production and logistical issues, leading to worldwide PC shipments falling 8% year on year. In the first quarter, vendors shipped 53.7 million desktops, notebooks and workstations according to the latest Canalys research.

Analyst Take: In the wake of COVID-19, most industries are expecting Armageddon with a few outliers that have seemed to thrive due to the restricted movement that has been required to mitigate the spread of the virus.

With people being forced to work from home and children migrating out of schools and into their kitchens and living rooms, it has put a strain on enterprise and education to provide enough computing horsepower to enable compliance. In this case, the required compute is in the form of PCs, primarily laptops that can support employees and students in all of their daily work.

A Quick Look at the Shipment and Market Share Data

The data itself was both promising and disappointing. Essentially, shipments did fall by about 8%, but it wasn’t due to demand. In fact, the data indicated that there is significant pent up demand, but unfortunately with China having experienced a shutdown that lasted a good portion of the first quarter, coupled with a migration to 10nm that has been less than perfect, the production volume couldn’t support demand, hence the 8% decrease YoY.

The numbers by PC maker shows Lenovo remaining in the top spot followed by HP and Dell, however, Dell is the only one of the PC makers to show annual growth. I think the growth numbers are somewhat dictated by chip availability more than demand so I’m not putting a lot of priority on the growth for this quarter and likely the next quarter. If we are able to return to a more normal day-to-day in the 2H of the year, I will expect that growth based upon preference will be more clearly indicated in the number putting more merit on the individual market share data.  Apple’s number are likely the most skewed due to store closures and its buyers being more consumers with discretionary income rather than schools and enterprises, which were the big volume buyers to support shifting behaviors and work habits in the wake of COVID-19. 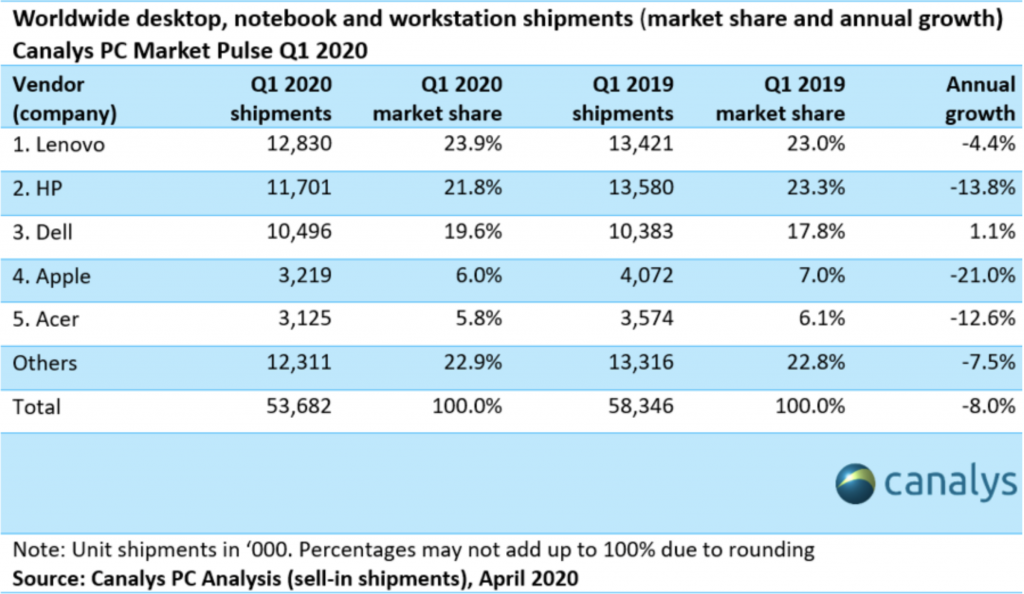 The fall in shipments is due to two factors. The first being an ongoing PC shortage related to the shift to 10nm and eventually 7nm and the delays that has caused. In this case, the rise in demand saw a new hurdle, which was a shutdown in the supply chain in China, which was hit early and hard by COVID-19. This meant some factories being closed and others seeing significantly reduced production. The good news is that this has largely been abated in China and the supply chain is returning to more normal output levels in China. This entire pandemic will likely lead the world’s largest tech companies to reconsider their supply chains and diversify to be better prepared for similar circumstances in the future.

While many industries will struggle to come back, I don’t believe that PCs will see much of a decline over the remainder of the calendar year. While mitigation in some major zones including the U.S. and China as well as Europe is starting to loosen restrictions, we are going to see a slow migration of non-essential workers back to offices and this will mean more investment in PCs that enable employees to work.

In terms of the specific growth numbers, I somewhat reduce the weight on the growth versus decline of individual manufacturers as the shipments could have been down based upon inability to meet order demand. This is especially true for the traditional PC makers. I’m a little bit more confident that the Apple decline is based on the shutdown of the stores in both China and later in the US during the first quarter and the smaller portion of the market that comes from large lot purchases from enterprise and education.

If the demand for Apple returns similarly to how it did for the iPhone, the market may be somewhat surprised by the numbers that will ship during Q2. (In case you missed it, Apple iPhone sales in China came in much higher than anticipated in the last quarter)

Despite Canalys suggesting that forward data is somewhat bearish, I believe this market for PCs will stay hot for the foreseeable future–COVID-19 will accentuate what I have long been saying, which is that the demise of the PC has been greatly overstated.

Cisco Puts Up $225 Million to Combat Spread of COVID-19