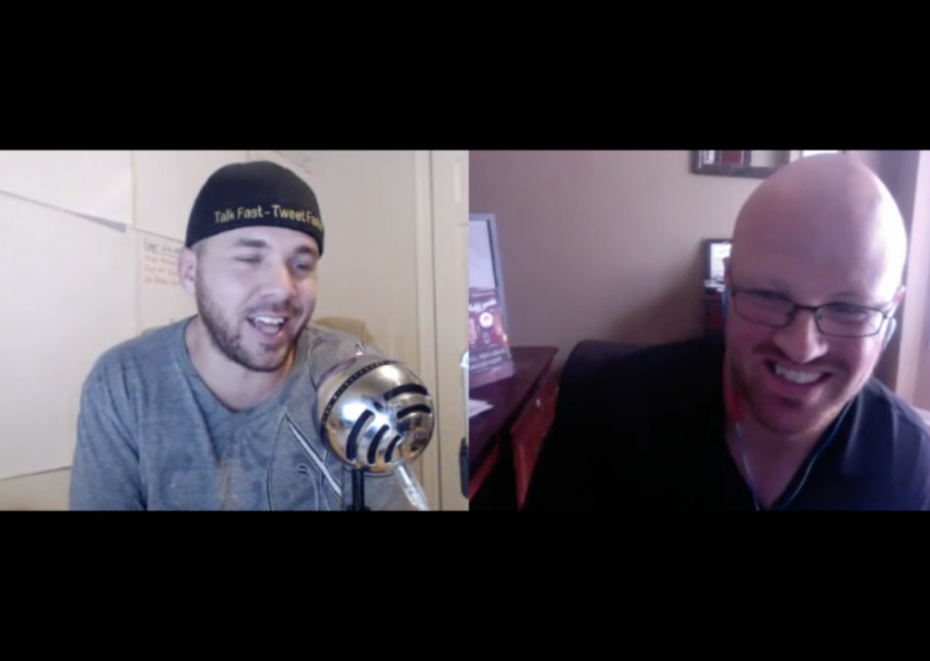 With this episode, we proudly announce our sponsorship by SAP.

After establishing that I have no middle name and that growing up with the last name “Newman” during the Seinfeld era was interesting (and considering but discarding a rebrand to “Newman and the Fonz”) Brian and I settled in on Blab.im to record this episode.

We’ve recorded episodes via Skype and via Google Hangouts in the past.  This was my first day using Blab, which Brian refers to as “the Brady Bunch version of Hangouts without all of the glitches.”   While video conferencing is something I’m very experienced with, and live streaming apps are gaining popularity, I was glad to have a chance to get back into a multi-person video chatting environment.  I especially enjoyed being able to engage with the viewers in the comments area.

Though Blab has been around for a couple of months already, Brian just discovered it about a week before we recorded this show.  It features some robust offerings such as saving the entire Blab video session along with comments, an iOS app where both video and comments can be contributed via mobile, and links for both video and audio only that are emailed to the host of a recorded Blab session after recording.  All of this makes Blab easy to use and easy to share.

The first time Brian tried the tool, Blab’s CTO jumped in on video with him and shared some tips and tricks.  We love this level of attention and engagement!

How Do You Handle FOMO?

While FOMO isn’t really a problem for me (a pager wearing millennial who is willing to adopt things a little bit later than everyone else), Brian leans into this fear of missing out so that he can test things and pass his feedback on to others.

Brian points out that most people have an entire page of apps on their smartphones that they never use.  His suggestion is to create a “FOMO folder” to corral all of these apps that you’re thinking about trying but haven’t gotten around to yet.

New technologies can advance the way you do things and make them better but sometimes we get focused on safety and not wanting to make changes.  This has been the case, I believe, with Google Hangouts.  They work and we know how to use them but they haven’t necessarily remained the best option for broadcasts.

I think “If we’re truly getting the community stuff right, what we’re doing is we’re looking at using tools that allow us to become closer to the community and closer to the people that we want to be engaged with, simultaneously creating deeper and more meaningful relationships and more loyalty to not just the content but the brand, our partners, our sponsors….” So, FOMO, for me isn’t something I look at from a personal lens but more from a business and community standpoint.

Brian says that the Blab team clearly sees things along these lines as well.  There’s almost always at least one member of their team present in a user generated Blab to field questions or just to greet their community – impressive given that there are only a small number of people on the team. They also ask for genuine, constructive (negative) feedback so that they can make their product better at every turn.

What About When Your FOMO Has No (Immediate) Solution?

Facebook recently rolled out Mentions for livestreaming within the Facebook feed.  But it was only made available to certain users with celebrity caliber followings.  Based on this, Brian questions the long term goal for the tool.  I liken this elitism to when Google Plus first came out.  Only certain people received early access.  Others had to ask for invitation from others.  I feel the beta testing pool should be a bit more diverse in terms of experience and backgrounds of the participants.

Beta testing can’t be open to everyone but it’s frustrating and disappointing when those who aren’t celebrities are excluded on that basis alone.  Facebook, in particular, is built on everyday people sharing with one another.  We think perhaps it would be better if their products and testing reflected that.

Why Does FOMO Matter?

“FOMO really matters if you have access to a tool that can improve the experiences of your employees, your community, your customers and the people that ultimately allow this to be possible,” I say. We don’t talk “at” or “to” our community.  We talk with them.  These are the people who read and listen to our content, they interact with and mention us on social media and they enable us to reach sponsors to who support us in continuing these efforts.

Today’s sale is about education and that’s a two way street. We’re offering a learning experience to our community but they’re also providing that for us.

Brian jokes that “the only guarantee about Google Hangouts is that something will go wrong.” But his point is that in the past six years there hasn’t been an improvement to the technology.  Things do actually go wrong frequently with Hangouts.  Perhaps a bit of FOMO and curiosity can help us find better tools or can help our existing resources stay thirsty for improvement.   In the end, the community and the customers will see benefits.

“Agile is the new launch,” if you ask me. There’s really no such thing as a traditional website or product or app launch these days.  You push it live and then begin tweaking and making adjustments.  FOMO for a developer or publisher or anyone creating something for community is an asset that will keep them asking how they can make the experience better for the customer.

We did an episode of #CloudTalk earlier today using Blab instead of Google Hangouts for the first time.  During the hour we trended on Twitter and we generated more tweets in one hour than we have previously.  The engagement level was higher and more enthusiastic.  Had we been sticklers about using our previous tools, this might not have happened.  FOMO in this case (wanting to take a risk and try something new) really paid off.

FOMO Can Help, But Shouldn’t Detract From Productivity.

Brian refuses to use new tools and technology that don’t save him time or improve his workflow or processes.  If a new tool or app takes more time rather than helping him be more efficient, he simply won’t use it.

Almost all of our shows circle back to trust and data. While there’s an endless supply of “shiny objects” in the form of emerging tools and applications to choose from, decisions should always be rooted in research and analysis.  We took a bit of a risk with this episode by changing our platform but it did pay off.  If our experiment showed that the new way was less efficient or effective than what we’ve done in the past, we’d have to consider that and possibly go back to the old way because it made more sense.

We recommend being flexible and curious.  It might pay off to take some small risks along the way.  Just be sure to analyze how things are working and adjust your plans accordingly.  Never deploy technology just for the technology’s sake.  Stay focused on your customer or your community’s experience.

We’d love to get your feedback on the sound quality for this episode.  If you have comments we’d love to share them with the Blab team.  We also hope you have FOMO for our SMACTalk podcast! Follow Brian and me on Twitter and look for our hashtag #SMACTalk.