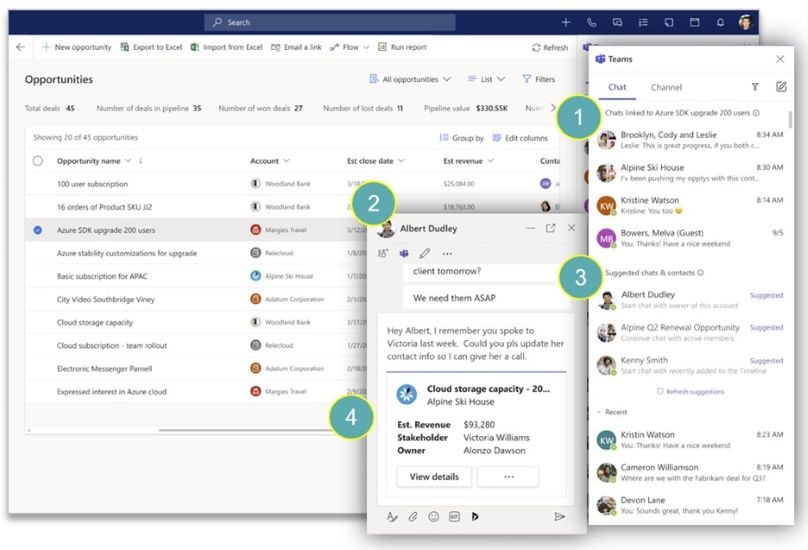 Analyst Take: Over the past year, as work shifted from office to remote for many, we saw a massive uptick in adopting collaboration platforms. This has led to significant growth for companies like Zoom, Webex, and most notably, Microsoft Teams.

Dynamics 365 has also been popular over the last year. In its most recent quarter, its growing cloud-based business application suite saw 39% growth. Almost double what the market leader Salesforce announced in its most recent earnings. The faster growth isn’t apple and apples yet, as Salesforce CRM is about 6x revenue of Microsoft’s D365 offering, but I’ve been clear in saying that Microsoft is the most likely to put pressure on Salesforce.

The increasing integration that is taking place between Teams and Dynamics 365 is addressing the need for a remote work operating system. Over the past year, we have seen Microsoft do more to integrate its architecture into teams with Power BI and Apps making their way into the platform. Productivity tools from O365 have also become native to the platform. Pop-outs have made it easy to fully function within Teams, even when using a small(ish) laptop.

As I see it, the goal is for remote and soon hybrid work to be done in its entirety, without ever leaving the Teams platform.

The announcements made at this year’s Ignite further those ambitions by tying the full Dynamics 365 application suite and Teams together in ways that make daily work and activities flow more naturally. This cuts across marketing, service, finance, commerce, and even HR.

What’s Notable in the Teams and D365 Integration

Features that caught my attention include new capabilities to meet, chat, and collaborate within the Dynamics 365 workspace. No need to switch between your biz app and your Teams app. It is all integrated.

Also, the embedded Teams chat experience in Dynamics 365 creates an easy-to-view side panel that shows interactions within an account and all personnel tied to a particular account. Giving tighter visibility between the account, those working on the account, and the actions required. Digital assistant capabilities also provide suggestions to optimize interactions and support needs that a particular customer may have—all within Dynamics 365.

Another new feature that caught my attention is the embedded dialer that enables voice and video to be initiated within the D365 environment. If the next best action requires a voice or video call, that can be launched within Dynamics 365 without bouncing to Teams or using another calling method.

The MSIgnite announcements also brought some much-needed integration with LinkedIn. Right within D365 Sales, teams can track the movements of contacts using LinkedIn Sales Navigator. Also, LinkedIn Sales Insights will be viewable right within the D365 environment. While the API for LinkedIn remains flexible broadly beyond Microsoft Dynamics and Biz Apps, I’ve been eager to see deeper integrations with LinkedIn.

While outside of the Dynamics integration, I wanted to take a moment to address a newly announced feature that I felt was important to address going concerns for enhanced security in collaboration platforms. Teams announced that it would support end-to-end encryption (E2EE) for one-to-one Microsoft Teams calls. This feature provides an additional option for conducting sensitive online conversations, and IT will have full control over who can use E2EE in the organization. I’m happy to see E2EE for Microsoft Teams being prioritized. This capability was something Zoom released in its most recent quarter. According to the announcements, one-to-one ad hoc VoIP calls will be available to commercial customers in preview in the first half of this calendar.

The operating system for the hybrid work experience will likely become a more central part of the future employee experience. Bouncing between apps is antiquated, and the integrations with Teams are making this less problematic. This type of functionality in time will become table stakes. Microsoft, having inherent advantages because of its full suite of software, platform, and infrastructure–but formidable competition will rise, likely using APIs to combat Microsoft’s completeness.

An encouraging debut of robust features making remote work and business applications more useful and seamless… As it should be.