The News: U.S. District Judge Yvonne Gonzalez Rogers has issued a permanent injunction in the Epic Games v. Apple case on Friday, prohibiting Apple’s App Store from stopping developers from directing customers to alternate purchasing and payment options. The injunction is scheduled to take effect on December 9th unless enjoined by a higher court. Read the full injunction here.

The Court has also ruled that Epic Games was in breach of its agreement with Apple when it implemented an alternative payment scheme in its Fortnite app, a move that got Fortnite removed from the App Store. Epic Games and has been ordered to pay Apple 30 percent of all revenue collected through the app since that change, which may amount to roughly $3.5 million. Read more from CNBC.

Analyst Take: I’ve been watching the Epic Games v. Apple case with great interest since it began about a year ago, with Apple removing Fortnite, Epic Games’ incredibly popular game, from its App Store. This essentially started a war between Apple and Epic Games, based on the implementation by Epic of an in-app payment system that allowed it bypass Apple’s standard fee of 30%, and naturally, a lawsuit followed.

Pursuant to Judge Gonzalez Rogers’ ruling, Apple is “restrained and enjoined from prohibiting developers from including in their apps and their metadata buttons, external links, or other calls to action that direct customers to purchasing mechanisms, in addition to In-App Purchasing and communicating with customers through points of contact obtained voluntarily from customers through account registration within the app.”

While this case was one watched with great interest, it turned out to not be the landmark antitrust case that many thought it would be. Judge Gonzalez Rogers successfully managed to steer it away from sliding wholesale into anticompetitive and antitrust territory. For instance, Judge Gonzalez Rogers limited the potential anticompetitive scope of her decision by disagreeing with either party’s definition of “the marketplace,” asserting instead that “the relevant market” in this particular case only referred to digital mobile gaming transactions. Under that market definition, the court could not conclude whether Apple was or was not engaged in monopolistic behavior under federal or state antitrust laws, and therefore avoided finding itself in the precarious position of having to potentially rewrite or run afoul of existing antitrust law. Apart from avoiding unnecessary controversy, this decision also makes the ruling far less likely to be overturned on appeal.

The Court did, however, find that Apple was indeed engaging in anti-competitive conduct, at least under the state of California’s own competition laws: “The Court concludes that Apple’s anti-steering provisions hide critical information from consumers and illegally stifle consumer choice,” Rogers wrote in her ruling. “When coupled with Apple’s incipient (meaning in an initial stage, or beginning to happen or develop) antitrust violations, these anti-steering provisions are anticompetitive and a nationwide remedy to eliminate those provisions is warranted.”

As a result, as of December 9th, Apple will no longer be able to prohibit developers from directing users away from Apple in-app purchasing and toward their own alternate purchasing links.

App Marketplaces Are Currently Going Through a Global Adjustment

The new rule is similar to other anti-steering restrictions already in place against the App Store outside of the U.S. and gaining speed around the world. Apple agreed only a few weeks ago to allow similar non-App Store signup links for content streaming apps in Japan. A new law in Korea has also begun the process of making third party app and in-app purchases legal. The European Commission also opened an anti-trust investigation rules for developers violate EU anti-competition laws last year, and has already resulted in a statement of objection as it continues to move forward. Politico reported in late June that parallel probes were also being considered in the United States by way of the Department of Justice and several state Attorneys General, although should the District Court’s decision prevail in this case, such actions may ultimately become redundant and find themselves losing steam.

Bottom line: Apple’s slice of that $100 billion per year market is still mostly safe. But here is where things get dicey for Apple: In the U.S., the injunction will make it possible for all app developers to direct their customers to their own websites in order to purchase or subscribe to digital content without paying the App Store toll of 15% to 30%. This means that other digital content producers, like popular music and video streaming services (think Spotify and Netflix for example), will be able to avoid the App Store toll, starting in December. And as I just pointed out, this shift is not only happening in the U.S. but globally. This means that if it wants to hold onto the totality of its App Store revenue, which seems unlikely at this point, Apple is likely going to have to retool some of its App Store agreements.

What is at risk for Apple is its estimated $64 billion in annual App Store revenue (based on 2020 numbers). Unsurprisingly, Apple’s stock dropped several percentage points in trading Friday on the heels of the ruling. Granted, the convenience of the App Store and Apple’s legendary UX combined make it unlikely that a majority of Apple users will go out of their way to make app purchases on alternate sites. That aside, even a 10% to15% loss in revenue would be enough to leave a few feathers ruffled at Apple, to say nothing of the uncertainty that this judgment appears to have injected into the portions of the Apple investor community just now waking up to this perhaps inevitable — or at least predictable — fork in the road for App Store revenue models.

On the bright side, Apple pursuing a basic price-matching scheme for purchases made through third-party links seems like a good plan to keep Apple users from wandering away from Apple’s walled garden, but the risk there is that it will place some downward pressure on App store revenues. At this point, however, Apple may have to settle for the least bad option available, or at least the one that minimizes the damage caused by this fresh crack in its garden wall. If Apple can keep user behaviors from changing and incentivize them to continue making their purchases via the App Store, it could cut the majority of its losses.

Note that regardless of the outcome of the appeal, the injunction doesn’t go into effect for 90 days. In the meantime, Epic Games confirmed to Bobby Allyn, NPR’s San Francisco-based tech reporter, that Epic is appealing the decision and that Apple is likewise “considering all legal options.” I noted a response to that Twitter that I’ve included below – which is pretty much a business fundamental — when neither party walks away 100% happy, the negotiation (or legal resolution in this case) is generally viewed a successful one. 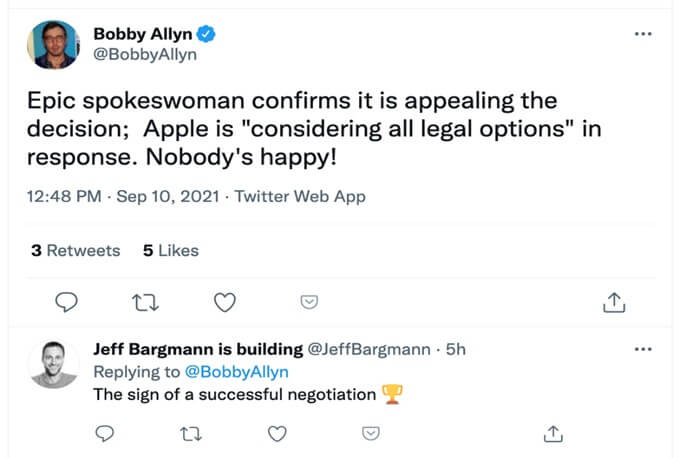 The writing on the wall seems to indicate that the days of Apple blocking developers from directing users to alternate payment links in order to bypass App Store fees are indeed coming to an end, and not just in the U.S. Given the amount of pressure on Apple (and Alphabet’s Google) to loosen restrictions on developers, I do believe that the District Court’s ruling reflects the inevitability of changes coming to all app marketplaces globally.

As a footnote, although the ruling creates obvious problems for Apple, the Court nonetheless sided with Apple on 9 of the 10 counts in the Epic Games’ complaint.

The only part of Epic’s lawsuit that prevailed was the claim (in Count number 10) that Apple had violated California’s Unfair Competition, albeit only partially. In fact, the Court awarded damages to Apple in an amount equal to 30% of the $12,167,719 in revenue that Epic Games collected from users in the Fortnite app on iOS through Epic Direct Payment between August and October 2020, and from November 1, 2020 through the date of judgment. The Court has also determined that “Apple’s termination of its DPLA and the related agreements between Epic Games and Apple was valid, lawful, and enforceable, although I don’t see anyone being surprised by that.

Alphabet’s Google Is Next

What’s ahead? Alphabet, Google’s parent company, is next. A similar case involving Google’s Play Store has yet to go to trial, but I expect that this ruling will play an important role in guiding the outcome of that case as well. The legal standards that guide how Apple must operate its App store to steer clear of anti-competitive judgments are the same by which Alphabet’s Google must also operate its own app store.