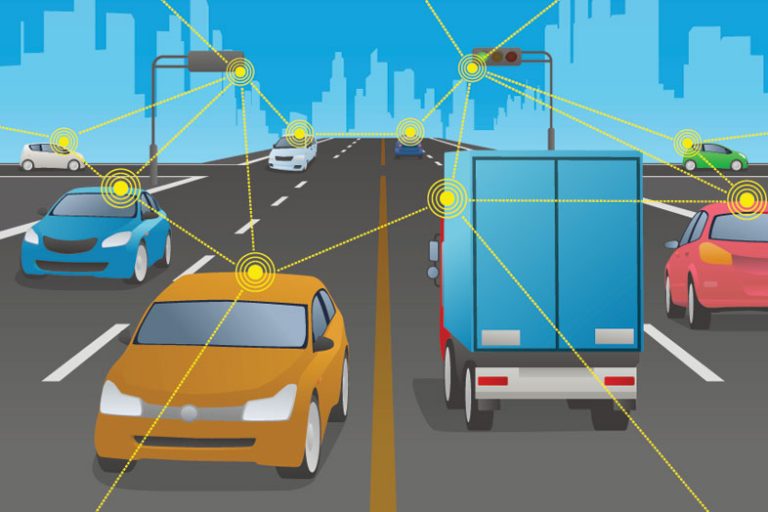 An intelligence revolution is underway, and at its very forefront is the IoT. You might be familiar with the IoT, or the Internet of Things, in terms of connected watches, home appliances, smart TVs, and more. The IoT has made a debut in the transportation sector and is predicted to completely change the way we drive in the next few years. Let’s discuss some of the changes we’ve already seen, and some we can expect to see in the realm of connected transportation.

Popular culture is full of futuristic self-driving cars – think Batman’s Batmobile and Knight Rider’s KITT. Turns out, this future is slowly becoming the present. Today, an increasing number of manufacturers are unveiling their self-driving car models in the public sphere. For instance Tesla’s “Autopilot” software allows Tesla cars to stay within a particular lane, change lanes at the tap of a button and avoid hazards around the car. Later this year, Nissan is set to launch its Qasahi model—a car with semi-autonomous drive technologies. Much like Tesla, this car will be able to take over from the driver in certain conditions. For example, in heavy traffic conditions the car will manage braking, steering, and acceleration.

The next big thing for IoT in transportation is teaching cars how to drive in the same way humans do. Unlike Tesla’s Autopilot software mentioned above, this involves a deeper learning that makes cars fully autonomous and driverless. According to BI Intelligence, steps one, two, and three regarding driverless vehicles are already well underway. These include the ability for cars to gauge and drive in traffic jams, the ability to summon a car in a small space (such as a garage) through a smart device, and the ability to change lanes on the highway with blind spot technology included. BI Intelligence explains step four as cars that need drivers behind the wheel, but with the option to press a button that allows the car to completely drive itself. Finally, step five, and the most exciting of them all will be a totally driverless vehicle that does not require a driver or even steering wheel! These are expected to hit the market after 2020.

High price and safety concerns associated with driverless cars are the biggest obstacles preventing their widespread use. Tyler Duvall, a partner at analyst firm McKinsey & Company, argued that it is unlikely that this new technology will hit the roads until government regulations to handle unfortunate events are in place to deal with the same. For example, questions such as who would be responsible in the case of a collision—passenger or driverless car—still need to be figured out. Questions like these and others, especially following Tesla’s infamous fatal failure of its autopilot feature are causes for concern.

Sensors are integral to any kind of smart technology that involves transportation. Self-driving cars wouldn’t run without sensors, as these are what allows the car to monitor and track a vehicle’s position in relation to other cars. Similarly, sensors that are embedded into roads, streetlights, and traffic signs can collect and transmit a huge amount of data that would otherwise be inaccessible in real time. For instance, sensors can manage traffic flow by adjusting the length of traffic signals. Certain cities have started using sensors to track public transportation like buses as they move from one stop to another. In cities like Las Vegas and Michigan, sensors within street lights monitor the air quality and changes in road conditions.

Traffic signals with built-in sensors can reduce congestion by as much as 20 percent, according a report by McKinsey. In this way, sensors are extremely useful in tracking and analyzing road and traffic conditions. In congested cities, these would be a boon to install, but unfortunately sensors are quite an expense and can cost up to $100,000 per signal to implement. Chicago has undertaken Array of Things (AoT), which involves an undertaking of 500 citywide nodes. Brenna Berman, commissioner and CIO of the Chicago Department of Innovation and Technology, states that, “Publishing the data to the city’s open-data portal will occur in almost real time. Any department in the city will tell you that more precise data will lead to more precise planning.”

Simply put, a connected car is that which has direct access to the internet and is able to link with other connected items such as smartphones, tablets, and even traffic lights and tracking devices.  According to research firm Gartner, more than a quarter billion cars will have some sort of wireless connectivity by 2020. Connected cars will make for a fully immersive and easy driving experience, with access to a plethora of apps that focus on safety, entertainment, and well-being. Today, apps like GasBuddy enable drivers to find the cheapest gas station near their current location, and app integration such as Google Maps, and Spotify linkups within a car are becoming commonplace. Being able to connect to traffic lights and tracking devices will enable cars to avoid traffic, pick the best route, and avoid hazards and accident-prone areas.

Mercedes Benz is one of the manufacturers connecting their cars to consumers via smartphones. Features include getting geofencing notifications if the cars leave a defined area (parking space, home garage) as well as a remote parking feature for cars to park themselves via smartphone control. Connected cars aim to provide an increasing number of such services to make driving a safer and immensely convenient experience.

In the next few years, consumers can expect to see a major change in the way we drive. IoT has set the stage to revolutionize our daily commute, and the future promises to show some exciting technology advancements in the transportation industry.