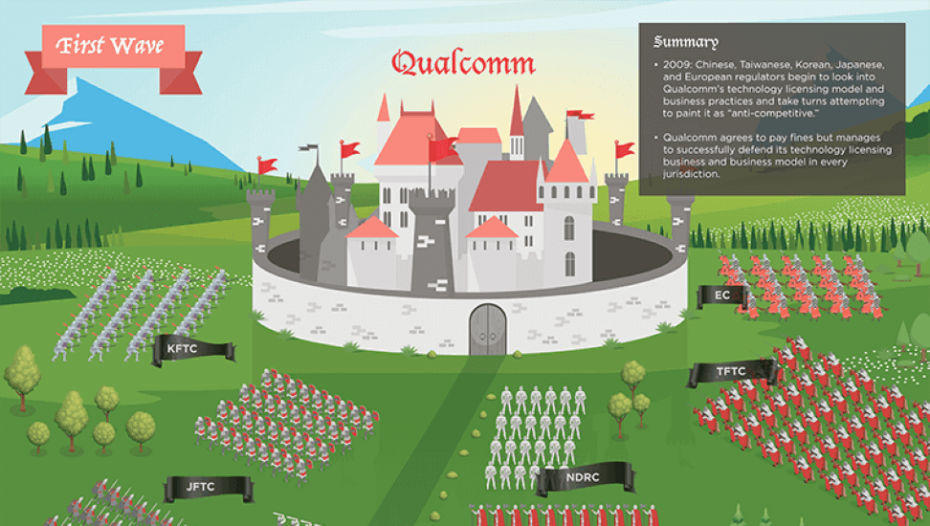 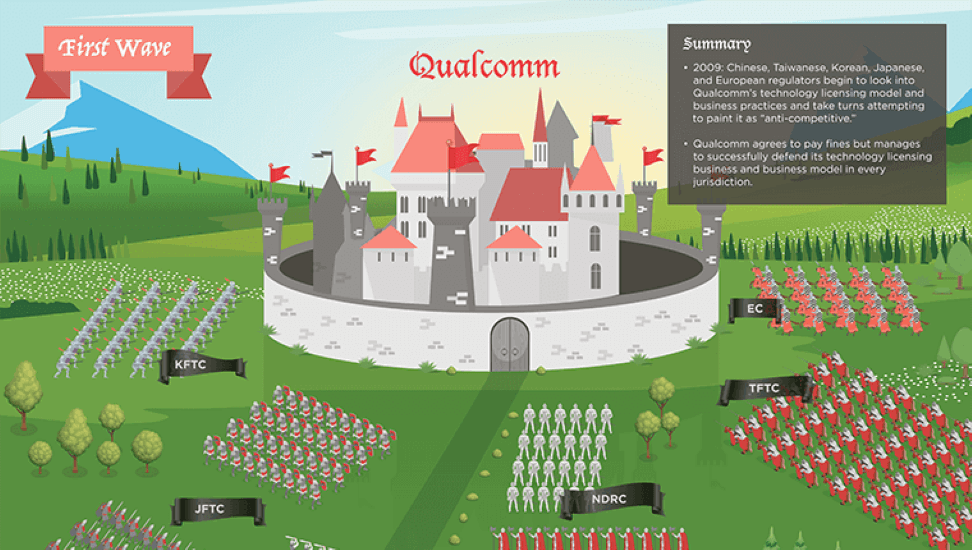 Looking at how healthy and well-positioned Qualcomm is today, especially as a decade of R&D investments and fundamental technology bets are beginning to bear fruit with the commercialization of 5G, it would be easy to forget how many challenges the San Diego tech giant has managed to overcome over the course of the past seven years. The San Diego based chipmaker and innovation powerhouse somehow found the wherewithal to fight off three consecutive waves of billion-dollar sieges over the course of roughly five years, and inexplicably emerged in better shape from its extensive ordeal.

Who tried to take down Qualcomm? What were they after? Why didn’t they prevail? What does Qualcomm’s resilience mean for the future? These are the questions I will attempt to answer in this three-part series.

The First Wave: Enter the Regulators

The great siege of Qualcomm’s first act focuses almost exclusively on regulators coming after the company’s technology licensing model, particularly as it pertains to Standard Essential Patents (SEPs for short). Under the guise of investigating potential “anti-competitive” behavior, the Chinese, Taiwanese, Korean, Japanese, and European equivalents of the United States’ FTC all took turns attempting to paint Qualcomm’s technology licensing and/or business practices as anti-competitive, when they, in fact, were not. Nevertheless, the first act of the siege began with a repetitive, multi-front assault that, in hindsight, seemed far more focused on extracting hefty fines from a large U.S. technology company, and doing so in the most public way possible, than on curbing any actual anticompetitive behavior. Top tier U.S. tech companies the likes of Apple, Google, and Facebook, among others, have been similarly targeted by non-U.S. regulatory agencies over the years, so it isn’t all that surprising that Qualcomm’s number came up on the rotation once again, particularly as the mobile market was starting to heat up.

A few aspects concerning the timing of this daisy chain of regulatory action strike me as interesting. First, these attacks, while perhaps not outright centrally coordinated, did seem somewhat connected. On the one hand, they came one after the other across Asia and Europe, as if someone had lined them up like dominoes. On the other, they all embraced the same flawed theory of Qualcomm’s alleged anticompetitive behavior. Emphasis on flawed, as Qualcomm’s technology licensing model has now been proven not to be anticompetitive at all, as we will touch on a bit later. What I found interesting then is that a half dozen antitrust regulators decided to line up one after the other to pursue Qualcomm over the same non-issue, even though they are all independent. It might not have seemed that they were all working off the same crib sheet had their theory of the case against Qualcomm’s licensing model turned out to be valid. However, as it was neither valid nor based in fact, the international antitrust crusade being mounted against Qualcomm across Asia and in Europe seemed not only manufactured but driven by the same handful of actors — and presumably orchestrated by companies with the financial and commercial motives, political access, global reach, and resources to pull it off.

Regulators, seeing an opportunity to score political wins and extract significant fines from a U.S. technology company, were eager to play along. One after the other, the KFTC, NDRC, TFTC, and the EC negotiated the conditions under which they would agree to end their siege. These conditions resulted mostly in fines — $975 million by the NDRC, $875 million by the KFTC, $773 million by the TFTC, and $1.2 billion by the European Commission, totaling nearly $4 billion — but also in concessions by Qualcomm that can clue us in to some of the adjacent motivations I cannot help but glimpse in their behaviors. One could wonder, for example, if the KFTC might not have worked to try to weaken Qualcomm’s technology licensing bargaining power to benefit Samsung, for instance (as subsequent scandals involving the KFTC and the Korean handset maker would perhaps suggest), and if the NDRC might not have worked to do the same thing for Chinese OEMs. Qualcomm’s settlement with the NDRC, for example, resulted in Qualcomm agreeing to lower SEP royalty fees to 65% of a device’s wholesale price, which seems more the outcome of a business negotiation conducted through a government proxy than the settlement of a legitimate antitrust dispute. The JFTC, for its part, ultimately found no evidence of wrongdoing, withdrew their complaint, and imposed no fines.

What may get lost in the shuffle of this daisy chain of mini regulatory sieges against Qualcomm, however, is that Qualcomm managed to successfully defend its technology licensing business, and most of its associated revenues. This is important for several reasons: First, Qualcomm invests heavily in R&D, which fuels the growth of the company’s extensive patent portfolio. Qualcomm then monetizes its intellectual property (IP) through its technology licensing business, and the cycle of investment into innovation generating revenue that can be reinvested into innovation goes on and on. This is the mechanism by which Qualcomm manages to remain a leader in wireless technologies, including 4G and 5G, from R&D to standards to modems and RF solutions, to AI, GPUs, Bluetooth, XR, connected vehicles, the IoT, and so on.

Second, Qualcomm’s technology licensing business, by its very nature, makes these innovations accessible to companies as large and established as Samsung and Apple, and as small and new as the freshest startup, to build solutions, products, and value across pretty much every industry vertical you can think of. Because it’s so open, Qualcomm’s technology licensing business is one of the most important engines of technological growth and economic momentum in the global technology ecosystem. 5G technologies alone are expected to create over $13 trillion in economic value by 2035, and Qualcomm is easily one of the most important contributors to the 5G NR standard in the world today. Hypothetically, should anything happen to Qualcomm’s ability to continue to generate revenue from its own R&D investments in fundamental technologies, not only would Qualcomm pay a financial price, but the entire technology ecosystem would be harmed as well.

In other words, as the technological fortunes of all organizations and users who depend on fundamental wireless technologies like 4G, 5G, Bluetooth and WiFi, (not to mention scores of adjacent fundamental technologies that touch on AI, XR, mobile compute, automotive, and the IoT), are inexorably tied to Qualcomm’s technology licensing revenues, any successful attempt to weaken or undermine Qualcomm’s ability to properly fund its own R&D engine would result in a likely slowdown in technology innovation, which would in turn likely contribute to an economic slowdown in the technology and telecommunications sectors. Who would benefit from this? A handful of Qualcomm competitors in chipsets and 5G, an even smaller number of handset makers, and an even smaller number of countries that happen to be legitimate economic rivals of the United States, but we will get back to that in a moment.

The important nugget of insight here is that despite a staggered, multi-year, multi-front siege of Qualcomm by regulators apparently tasked with weakening the U.S. innovation giant’s ability to properly monetize its own investments in fundamental R&D, Qualcomm managed to protect its technology licensing business. Yes, fines had to be paid, and concessions had to be made, but the fundamentals of Qualcomm’s innovation engine remained unscathed. Regulators extracted their pound of flesh and went home, leaving Qualcomm a little bruised but in very good shape, all things considered.

In Part 2, we will take a closer look at the second wave of attacks against Qualcomm, this time led by Apple and Broadcom.