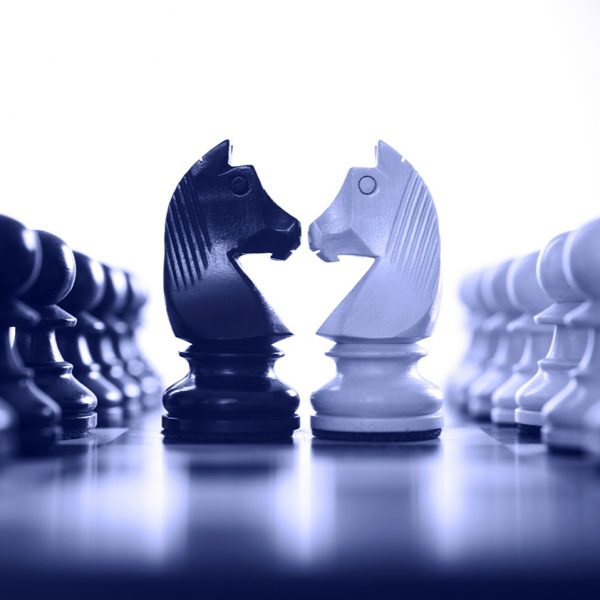 Apple, Qualcomm, and the fight to save innovation.

For the last few months, tech giants Apple and Qualcomm have been engaging in an escalating sort of proxy war over licensing fees, royalty fees, and the future of IP laws. As far as we can tell, the conflict appears to be driven in great part by Apple’s attempt to get out of having to pay for the right to use Qualcomm’s IP in some of its products. (A little clarity won’t hurt, so look for a detailed breakdown of the case and its timeline soon.)

We are using the term “proxy war” today because the growing conflict between both companies is being waged, at least so far, mostly through third parties – namely regulators (like the KFTC and the FTC) and contract manufacturers that build Apple’s iPhones and iPads. Here is how the strategy appears to be playing out from our vantage point so far:

The situation is a lot more complex than that, obviously, but for the sake of keeping things simple and short, this is basically what we have witnessed so far in 2017.

* Note that Apple, unlike most other phone manufacturers, isn’t a Qualcomm licensee; its contract manufacturers are.

SAN DIEGO – May 17, 2017 – Qualcomm Incorporated (NASDAQ: QCOM) today filed a complaint in the United States District Court for the Southern District of California against FIH Mobile Ltd. and Hon Hai Precision Industry Co., Ltd., (together known as Foxconn), Pegatron Corporation, Wistron Corporation, and Compal Electronics, Inc., the four manufacturers of all Apple iPhones and iPads sold worldwide, for breaching their license agreements and other commitments with Qualcomm and refusing to pay for use of Qualcomm’s licensed technologies.  Qualcomm seeks an order that would require the defendants to comply with their long-standing contractual obligations to Qualcomm, as well as declaratory relief and damages.

“It is unfortunate that we must take this action against these long-time licensees to enforce our agreements, but we cannot allow these manufacturers and Apple to use our valuable intellectual property without paying the fair and reasonable royalties to which they have agreed,” said Don Rosenberg, executive vice president and general counsel of Qualcomm. “As Apple continues to collect billions of dollars from consumer sales of its Qualcomm-enabled products, it is using its market power as the wealthiest company in the world to try to coerce unfair and unreasonable license terms from Qualcomm in its global attack on the company. Our license agreements with Apple’s manufacturers remain valid and enforceable. The manufacturers must continue to live up to their obligations under these agreements and Apple should immediately cease its tortious interference.”

As far as we can tell, Qualcomm made the right call here.

Apple’s strategy is as clever as it is insidious. Beyond the lawsuits and complaints themselves, the PR piece has, thus far, been pretty effective: We note that more than a few tech journalists appear to be paraphrasing Apple-friendly press releases without fact-checking them, for starters. Add this to a widespread pro-Apple bias predicated on years of effective brand marketing and great products, and what you end up with is a rather one-sided narrative that tends to favor cool-kid Apple over the less flashy Qualcomm through the regurgitation of cherry-picked talking points and the selective omission of contradicting facts.

Fortunately, we aren’t on deadline, and we aren’t chasing scoops for clicks. We are analysts. We analyze. That means that we dig and do research, don’t rush to judgment, and don’t just repeat corporate messaging without taking the time to check it all for accuracy. We like to be on the right side of facts, and although most of us here are long-time Apple fans, we aren’t going to let that get in the way of our analysis.

When we read about the FTC’s antitrust complaint against Qualcomm as “evidence” that Qualcomm is in the wrong, what jumps out at us is the lack of follow-up on that claim. For starters, the complaint doesn’t appear to hold much water, and the FTC may not be able to prove most (if any) of its claims in court. Second, no mention is ever made of FTC Commissioner Maureen Ohlhausen’s extraordinary dissenting statement in which she outlines the FTC’s dubious complaint’s critical flaws. We strongly recommend that everyone read it. Third, the presumption of Qualcomm’s “guilt” just because the FTC has filed a complaint, especially given the weakness of the FTC’s arguments, is problematic for fairly obvious reasons.

“My practice is not to write dissenting statements when the Commission, against my vote, authorizes litigation. That policy reflects several principles. It preserves the integrity of the agency’s mission, recognizes that reasonable minds can differ, and supports the FTC’s staff, who litigate demanding cases for consumers’ benefit. On the rare occasion when I do write, it has been to avoid implying that I disagree with the complaint’s theory of liability. I do not depart from that policy lightly.

“Yet, in the Commission’s 2-1 decision to sue Qualcomm, I face an extraordinary situation: an enforcement action based on a flawed legal theory (including a standalone Section 5 count) that lacks economic and evidentiary support, that was brought on the eve of a new presidential administration, and that, by its mere issuance, will undermine U.S. intellectual property rights in Asia and worldwide. These extreme circumstances compel me to voice my objections.”

Read the rest of her argument here.

Using the FTC’s complaint to underpin the legitimacy of Apple’s case against Qualcomm is just lazy. Anyone who has bothered to read it and browsed through Commissioner Ohlhausen’s dissenting statement would know this.

Furthermore, simply reading Apple’s January 21, 2017 statement regarding its action against Qualcomm should have set off more than a few alarm bells among members of the industry, journalists included, who understand the technologies and IP that Qualcomm is rightly working to defend. Taking it from the top:

“For many years, Qualcomm has unfairly insisted on charging royalties for technologies they have nothing to do with.”

Actually, no. For many years, Qualcomm has fairly charged royalties for technologies that they did, in fact, bring to the market. For anyone to suggest otherwise is just bizarre.

“The more Apple innovates with unique features such as TouchID, advanced displays, and cameras, to name just a few, the more money Qualcomm collects for no reason and the more expensive it becomes for Apple to fund these innovations.”

Let’s unpack that: First, Apple’s “unique features such as TouchID, advanced displays, and cameras” are great, but the iPhone’s features are immaterial to the royalty agreements tied to Qualcomm’s IP (IP without which the iPhone would not be able to function as it does, regardless of its unique features). Qualcomm is not charging Apple for Apple’s own innovations and unique features. Qualcomm is charging Apple (the contract manufacturers, actually) for their licensed use of Qualcomm’s innovations without which smart phones, including the iPhone and its unique features, could not exist in the first place. Big difference.

Second, “the more money Qualcomm collects for no reason” is an absurd thing to say given that Qualcomm’s IP is just as valid as Apple’s IP: There is a pretty clear and evident “reason” for the money Qualcomm collects from licensees, and I cannot imagine a universe in which anyone doesn’t understand this, let alone the folks at Apple. There is no need to dig deeper into Apple’s entire statement today, so let’s move on. You all get the point.

This is why we are more than a little baffled that more journalists and tech industry pundits haven’t caught on to, if not the absurdity of Apple’s language, the false premise of its overarching argument. As much as we would love to pat ourselves on the back for seeing through the smoke and mirrors, it is difficult to do that when it requires so little scrutiny on anyone’s part to do so: Spending just a few extra minutes doing a little fact-checking before going to print should have been enough to shed enough sunlight on this dispute’s most glaring flaws to stop even the most rushed journalists in their tracks. For our part, the deeper we dig into the details of this dispute, the more it is beginning to look and feel a lot like a pretty standard shakedown.

Seeing the bigger picture: What would a world in which megacompanies could easily invalidate their competitors’ IP really look like?

We now come to the greater point we all need to grasp before too long: This fight isn’t really about Qualcomm. Sure, it’s about Qualcomm now, but in the long run, this is really about whether or not we will sit by and let a handful of companies – companies with enough power and money to erode their competitors’ and vendors’ IP protections –  manipulate the system to a point where they can just, at will, push competitors out of the way without having to actually outperform them in a fair market.

As Futurum Principal Analyst Daniel Newman points out in this short video, “if companies can basically decide at will what a contract is worth, what innovation is worth, what R&D is worth, is only what they’ll pay for it, then what is going to be the incentive for new and up-and-coming companies to make major investments in research and development?” Beyond Apple and Qualcomm, this is what this dispute is really about, and that is why getting this discussion right is so important.

Fact: Companies that invest billions in innovation and IP should have the right to protect their investment. Apple has argued time and time again for their need to fiercely protect their IP, and for a number of very valid reasons. This thinking naturally extends to all companies, not just Apple. Steve Jobs himself argued this very point when HTC tried to get around using Apple’s IP for free the way that Apple now appears to be trying to get around using Qualcomm’s IP for free. In his own words:

Steve Jobs’ words and the principle behind them matter as much now as they did then. Irony notwithstanding, we should all be careful not to lose sight of that, particularly as they pertain to this case, and the dangerous new legal precedents it may yet set.

If we allow this to happen, if we collectively and passively side against Qualcomm without doing our homework, without making sure that we aren’t being manipulated into believing an incomplete and dubious story, not only will the outcome of this case potentially start us on the road of monopolies and oligopolies in the tech world, it will also put us on a fast-track to innovation nowhereville, where we can look forward to kissing the current pace of industry-wide innovation goodbye – especially as it relates to wireless networks, mobility, and the IoT.

As things continue to heat up between Apple and Qualcomm, and their dispute spreads to more third parties and possibly other segments of the tech industry, expect a lot more commentary and analysis from our team. In the meantime, stay sharp, and remember to fact-check what you read before jumping to any conclusions. There is much more at stake here than what meets the eye.

Disclosure: Futurum Research, like all research and analyst firms, provides or has provided research, analysis, advising, and/or consulting to many high-tech companies in the tech and digital industries. The firm does not hold any equity positions with  any other companies cited in this column.