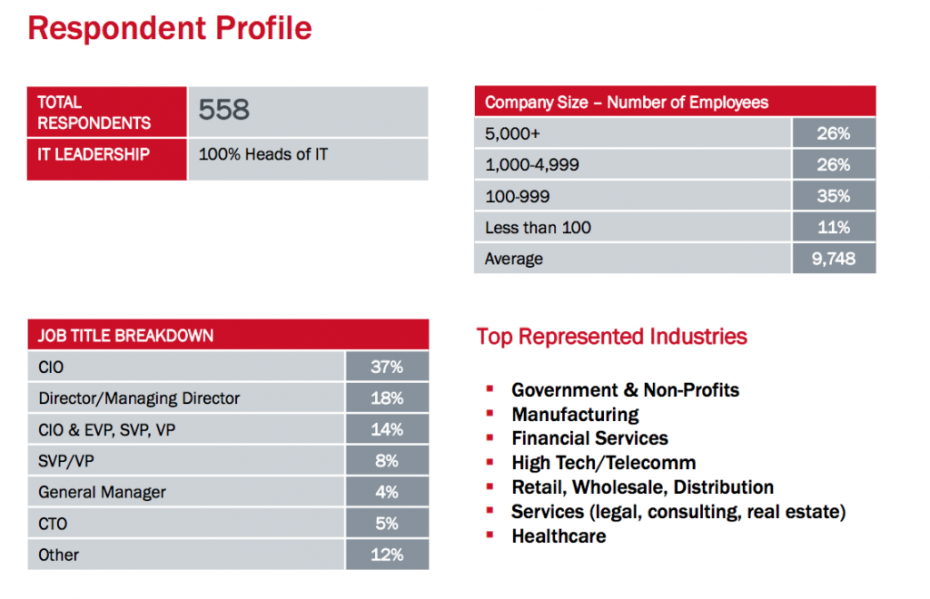 The role of the Chief Information Officer (CIO) is one that has seen constant change over the years, as the rapid pace of the digital revolution has presented business with new opportunities and challenges. That evolution seems likely to continue according to a recent study, which suggests that IT leaders see themselves playing a much more strategic role in the future, although history suggests that this may not be as easy to achieve as they would like.

The study is the 14th annual CIO Survey from CIO Magazine. It takes a snapshot of the views of IT leaders across the world, providing a benchmark of how technology is evolving in business. The 2015 study is based on 558 respondents, all of whom are heads of IT, across multiple verticals and fairly equally representing companies of various sizes. 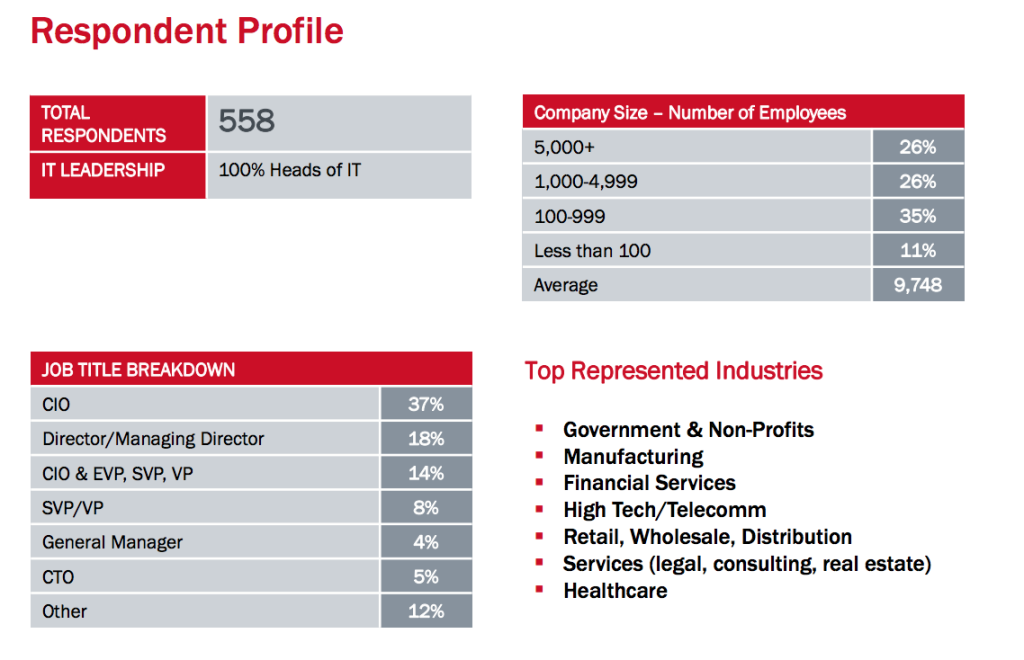 To gain a better understanding of what the future holds for IT leaders, it’s worth reflecting on the way the CIO role has evolved to where it is today. As far back as 2011, during their centennial celebrations, IBM declared the emergence of the CIO one of the 100 most iconic moments of progress. Ever since computers began to be introduced into business back in the 1950s, the importance of IT leadership has been recognized, although initially with the not so grand title of “director of data processing.” As computing began to be seen as more than just a back office function, the role of the IT leader took on more responsibilities with the title changing to the broader “director of management information systems.” And, surprisingly, it wasn’t until the mid 80s that the importance of the IT executive was fully recognized with a seat at the C-Suite table.

That recognition continues today with almost two-thirds (64 percent) of research respondents saying they hold a seat on the Business Executive Management Committee. That figure is slightly up from last year’s 62 percent, but down from 66 percent in 2013. A statistical blip or a sign of the trend going into reverse? A sign that perhaps silos are finally coming down and CIOs are being absorbed into the overall machinations of corporations? I hope so! Whatever it is, it’ll be interesting to see the relevant figure in the report next year.

Blip aside, 64 percent of CIOs today say their CEO consults with them on a regular basis, while 44 percent report directly to their CEO. For purposes of the study, CIOs report that their common responsibilities are the completion of a major enterprise project and/or helping to reach a specific revenue growth goal.

CIOs definitely want to spend more time on the strategic aspects of business in the future. I’ll admit to bias here, but to my way of thinking this is extremely important. The smart use of data and technology is what drives business growth today. These things fuel sales, marketing, product development, customer service—virtually every aspect of a businesses’ operations. As such, it only makes sense that the CIO is closely connected with the CEO and that he or she plays a role in helping to determine the overall strategic initiatives of the company. CIOs very much agree, and in order to achieve that, CIOs report they feel the focus of their responsibilities need to change in three key areas:

The reports authors conclude that history suggests that today’s CIOs might lack the focus and the time to achieve these goals and, based on the comments from the survey participants above, it appears that they agree. It’s clear that CIOs want to move out of the task management/project management role and into a role that allows them to put their knowledge of technology and their abilities with regard to data analysis to work for the companies they serve. Note from the chart below that some 34 percent of CIOs in large organizations are business strategists. 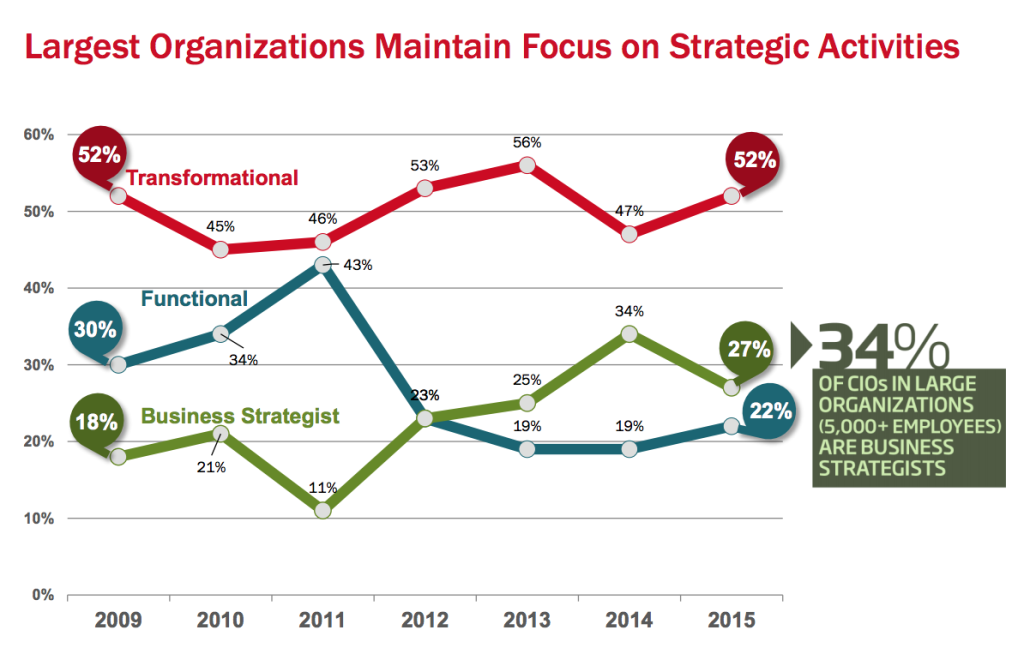 IT can be perceived as an obstacle in business. This is an area where the perceptions of CIOs can be misaligned with perceptions of their colleagues in other departments. The study compares what the CIO thinks about their place in their company, with market researcher IDC’s LOB Sentiment Survey, which taps into the perceptions of other business stakeholders. Some interesting and — perhaps unflattering — differences are revealed:

Increasing security demands. According to the study, the percentage of time a CIO spends on security concerns is on an upward path, from 24 percent in 2014 to 31 percent in 2015. This is especially true in North America, where security management accounts for more than a third (35 percent) of an IT executive’s time. This situation is unlikely to change much over the next few years as the onslaught of cloud applications, BYOD, and Shadow IT will see IT scrambling to deal with increasing security and privacy challenges.

Skills shortages. Nearly two-thirds (62 percent) of CIOs in enterprise organizations and 56 percent overall expect to see significant skills shortages in IT over the next year. This is an important thing for MSPs to note and prepare for, and this is a great way to serve your customers more effectively. Big data/business intelligence and analytics, cited as one of the key drivers of future technology investment, tops the list of skilled people that will be hard to find. Security and risk management, application development, and mobile technology skills are also likely to be in short supply.

Set against that background, a move to a more strategic role for the CIO may prove to be harder to achieve than many hope.

A final snippet from the CIO magazine study – after five years of relative stagnation, average compensation for CIOs across the industry rose from $219K last year to $235K this year. CIOs it appears are successfully negotiating a higher remuneration package to reflect the greater challenges and responsibilities they are facing.

The role of the CIO is one that is constantly evolving to meet the demands of technological advances, security issues, and business pressures. It will be interesting to see the future for the CIO, as accessible cloud solutions empower other business managers to find their own IT solutions. This is where an alliance with a managed services provider can be a win for both CIOs and other departments within a company. The best solutions likely come from looking from the outside in, without any preconceived notions or biases. Figuring out the right technology solutions for the goals of the business, then helping to implement them makes every—from the CIO to the IT team to the other department leaders,–heroes. Better managed IT means greater growth and profitability, happier, more productive, more collaborative employee teams, and more efficient and effective business operations. Everybody wins.

5 Steps to Building a Strong IT Brand
Do Companies Still Need A CIO? Introducing the IT Services Supermarket

This post was brought to you by IBM for MSPs and opinions are my own. To read more on this topic, visit IBM’s PivotPoint. Dedicated to providing valuable insight from industry thought leaders, PivotPoint offers expertise to help you develop, differentiate and scale your business.