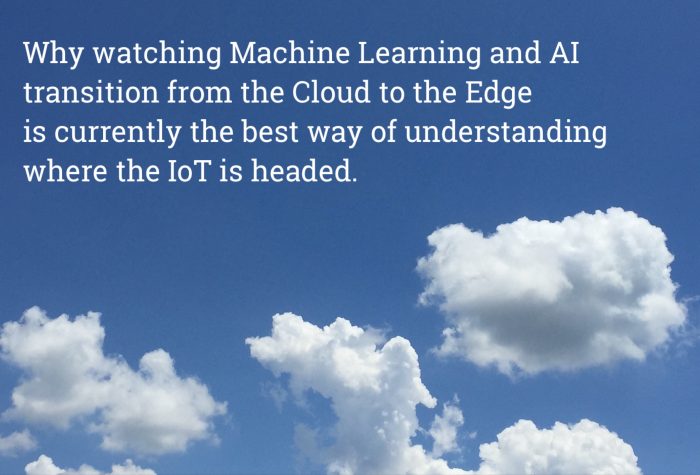 In Part 1 of our series, we talked about how the IoT is already creating a fundamental shift in how consumers will soon think about their relationship with technology, and how Qualcomm is helping drive that future. In Part 2, we explored the four fundamental pillars of the platform thinking business model that has made technology-centric companies the new kings and queens of business, and outlined how Qualcomm is leveraging these four pillars to empower the world’s most innovative companies to build the technology ecosystems of the future. Today, let’s start talking about what makes devices and environments “smart” – and how Qualcomm (again) appears to be at the forefront of the next evolutionary leap in IoT, including areas such as machine learning and artificial intelligence. Specifically, let’s talk about where smart computing lives, and why that matters within the context of the IoT’s future.

Before we get too far into today’s discussion, it is important to note that not every IoT device is (or needs to be) “smart.” Smart devices are a subset of the IoT. Many IoT devices today, such as sensors, are merely connected, as opposed to “smart.” It is also worthy of note that significant computing power doesn’t necessarily make smart devices. An entire category of connected IoT devices like parking meters, industrial sensors, agriculture monitors, and utility meters may not have been built with the ability to process and analyze data, self-diagnose, self-organize, or self-optimize. Just because a device is connected to the Internet or a wireless network, and technically belongs to the IoT, doesn’t make it “smart.” It can easily be made into a smart device, but it doesn’t have to be.

For the sake of simplicity, what makes a device “smart” can be broken down into three traits:

Some smart devices can do all three, while some are limited to only one or two. That’s all right. Intelligence comes in many different forms. Broken down a little further, they can take on the form of complex functions like voice and face recognition, real-time language processing, autonomous driving, network self-organization, and even the sorts of human-machine interactions that blend yesterday’s science fiction with tomorrow’s reality, but they can also be as simple as a robot vacuum cleaner’s ability to recognize and avoid dog poop, or a smart camera that alerts you when there is an intruder at home.

Today, I want to focus on where in physical space this computing power actually lives versus where many people may think it lives. Why? Because unless you understand this clearly, your investments in IoT technologies, as well as your understanding of which companies bring the most value – not only to the IoT ecosystem as a whole but to yours – won’t be what it needs to be.

2 – Edge vs Cloud: What you need to know about the structure of the IoT:

For months now, we have been writing about the Cloud: Cloud services. Big Data and the Cloud. Big Compute and the Cloud. Storage. Applications. The democratization of computing and IT. Deep Learning. Watson. Cloud this, Cloud that, and then some. That won’t stop anytime soon because the Cloud is one of the core technologies driving IT today, and digital business, and most business and productivity services. Without the Cloud, there would be no mobile internet, no e-commerce, no app stores, no social media. The world we live in today would not work the way it does. And yes, even machine learning and AI technologies, especially the ones that require massive amounts of computing power, the ones capable of processing gargantuan volumes of data, tend to be cloud-based. But not all machine learning and AI is cloud-based. A lot of it is already device and network-based.

Here’s something to think about: As the IoT continues to grow and become an integral layer of the increasingly interwoven world around us, the lion’s share of the kind of “smart” computing power we just talked about will increasingly not live in the cloud at all. It will live on devices. It will live on gateways and networks. Those “smart” capabilities will increasingly live out here in the physical world right alongside us. Break open any device, and you will see that it is already embedded in sensors and phones, in cameras and speakers, in thermostats and appliances, in cars and traffic lights, and hidden inside the shelves of your favorite retailers. This is what’s called the edge (or edge computing if you want to be a little more formal and old school). The edge is essentially computing power that doesn’t live in the Cloud, and doesn’t require the Cloud to function. The edge is what makes objects truly “smart.”

And there are some serious economics involved as well. Sending data to and storing in the cloud is expensive, especially if you are talking terabytes of data coming from say, sensors and cameras on an oil rig. By managing some of that data at the edge, and sending back only what is truly important, the guy breaking into the building for instance, “smart” devices can greatly reduce the amount of data being analyzed at the cloud level.

If your new smart phone is capable of being unlocked by your voice, your face, or your iris, but no one else’s, that’s because it has built-in (on-device) processing capabilities that enables it to do this. It can learn to recognize your voice in a crowded room. It can process natural language, or at the very least learn to recognize and process specific keywords. It knows on its own when to power down to conserve energy, and can simultaneously set itself to passive listening mode, in case you decide to wake it up by talking to it. If it is equipped with an advanced enough chipset (like many Qualcomm’s high-end mobile SoC platforms), its built-in digital signal processor can isolate your voice in a noisy space, cancel out all ambient sound, and digitally enhance your voice so that it sounds crystal clear during calls or recordings. (Handy if you need to take a call or shoot a video in the middle of a noisy stadium, or in a car with the windows rolled down, or in a crowded conference hall.)

Other examples: If you own smart speakers already, or a smart TV, or a smart thermostat; if you own a smart drone that flies itself, follows you around, and snaps pictures when you tell it to; if you own a car that can drive or park itself; if you have interacted with voice-activated devices, including those that talk back, you have experienced some of what edge computing can do. This type of smart functionality is made possible by advanced chipsets and platforms designed to make objects not merely connected but smart.

If we drew a distinction between “smart” objects and “connected” objects earlier, it is because merely being connected to the cloud, the web, or a network is no longer enough when user and consumer expectations have already evolved from being impressed with marginal smart capabilities from connected devices and environments to an expectation of reliable, consistent, uninterrupted, 24/7 smart capabilities from the same devices and environments. Think about it: If your smart speaker or smart phone’s voice detection capability depends solely on a connection to a cloud-based service, it isn’t going to deliver the kind of reliable performance you need it to. If your thermostat stops working properly whenever it loses its internet connection, it won’t be all that useful to you. If your smart home loses the ability to turn lights on and off whenever there is an Internet connection outage, that’s an annoying problem.

Even when it comes to natural language processing (think of the sort of interaction you have with Cortana and Siri, for instance), lag between your device and the cloud, then the cloud back to your device, can make a “conversation” with a virtual assistant choppy and untenable. At least some fundamental language processing and machine learning capability has to occur on the device in order to balance the load between a basic library of voice-AI interactions and far more complex ones that may require internet searches or complex analysis relative to an unexpected topic. The point being that while connectivity to the cloud can enhance both the functionality and utility of smart objects, the value of smart objects is fundamentally built on their ability to be smart independently of the cloud. That is why edge computing is so important to the IoT, and why IoT chip manufacturers, not cloud-based deep learning and cognitive computing companies, may have a significant edge (no pun intended) in both the development and growth of the IoT.

3 – SoCs, SONs, and the Cloud: Understanding the fundamental hierarchies of machine learning and human-to-machine interactions across the IoT ecosystem:

If you aren’t familiar with the SoC acronym yet, now is as good a time as any to change that. SoC stands for System On Chip. The difference between an SoC (System on Chip) and a CPU (Central Processing Unit) is a topic we will get to in another post soon. What you need to know for the purposes of today’s discussion is that because SoCs bring a lot more functionality to small, portable, mobile electronics than traditional CPUs, they essentially open the door to a completely different type of computing – more versatile, more compact, more energy efficient, and with much greater flexibility when it comes to overall connectivity – the so-called heterogeneous computing. SoC technology is at the heart of the IoT, and because of this, leaders in SoC innovation are driving the IoT.  SoC’s with layered software and security bring a high level of flexibility to device manufacturers as well.

Structurally-speaking, this is how you should think about the IoT: 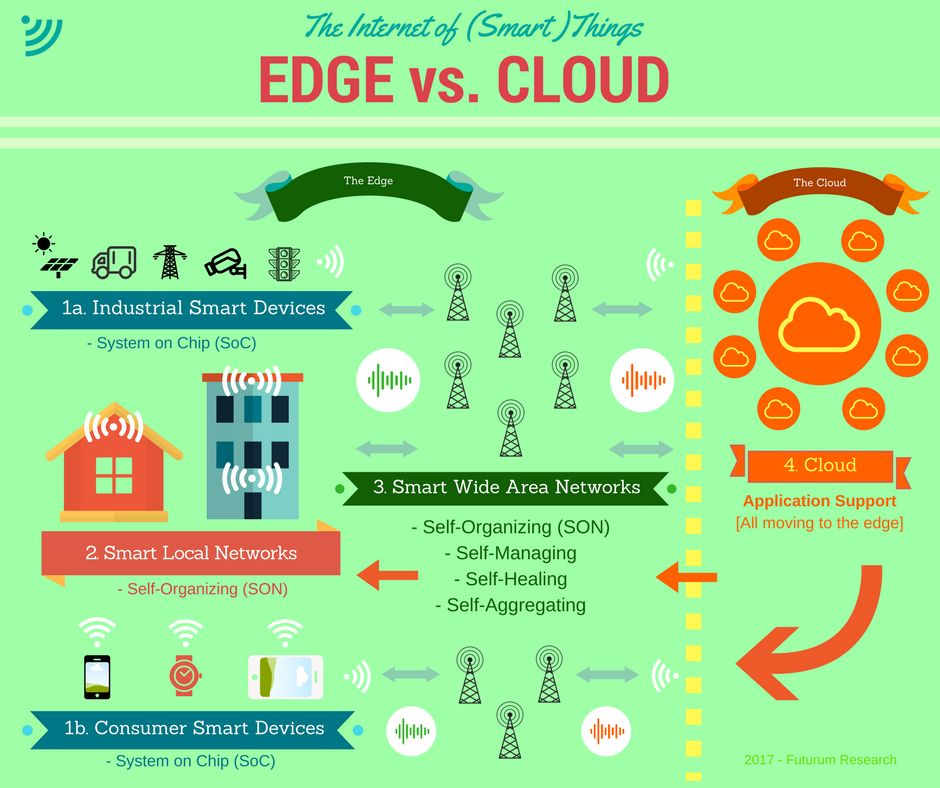 Yes, that diagram is an oversimplification. It doesn’t clearly show all the ways in which smart and connected devices interact. It doesn’t make mention of various types of connectivity standards like LTE or Wi-Fi. It doesn’t mention SoC hierarchies like Mobile SoCs, Application SoCs, LTE SoCs, Connectivity SoCs, and Bluetooth SoCs. There’s a lot that this diagram doesn’t show, and we will get to all of that in future posts. For now, we just want you to think about the basic layout of machine learning real estate across the IoT ecosystem. In its simplest form, what we have are four principal layers / hierarchies:

First, we want you to start thinking about how much of the IoT’s “smart” functionality is bound to be edge-based as opposed to Cloud-based, and what that means in regards to where IoT innovation is most likely to come from in the next two decades. (Companies like Qualcomm – whose SoCs and fundamental connectivity-driven technologies make the IoT possible.)

If you need a few metrics to put this insight into perspective, Qualcomm is now shipping 1 million chips to the IoT industry every single day, and to date, over 1.5 billion IoT devices from hundreds of brands already leverage Qualcomm technologies.

We also want you to start thinking about the IoT’s smart functionality as it has been in the past in terms how edge devices use to have basic autonomous computing and analysis capacity, while things like big compute, big analysis, deep learning resided in the Cloud layer. 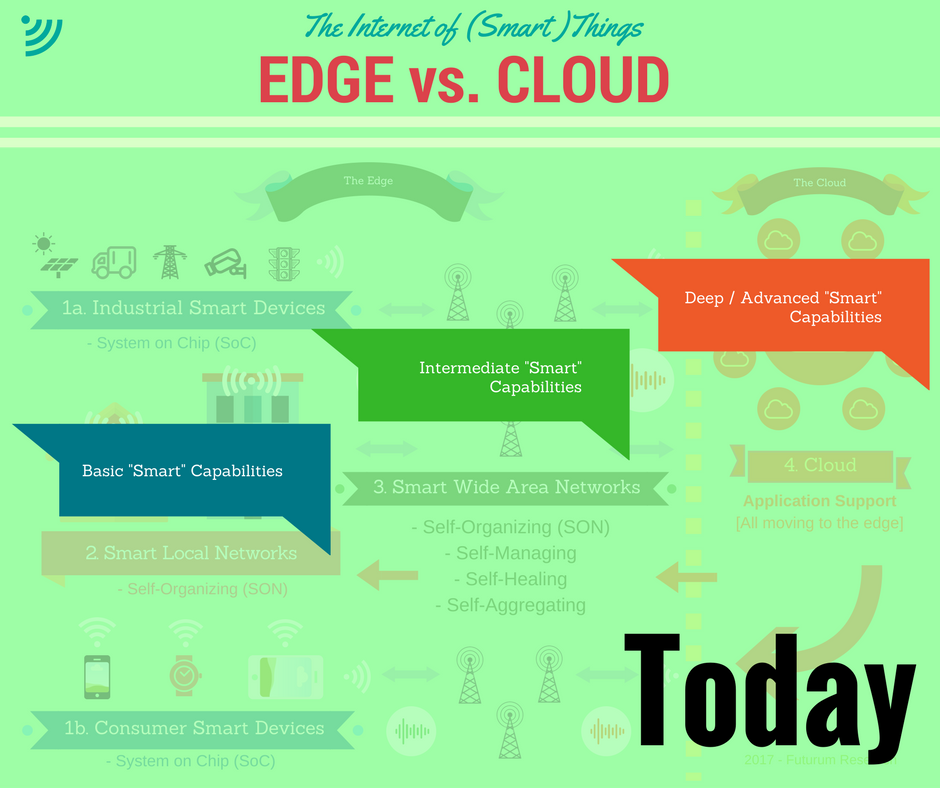 Lastly, we want you to think about what comes next. Specifically, how improvements in SoC technologies and the transition from 4G LTE to 5G will shift much of the capabilities we generally expect from the Cloud to the edge in the next few years: 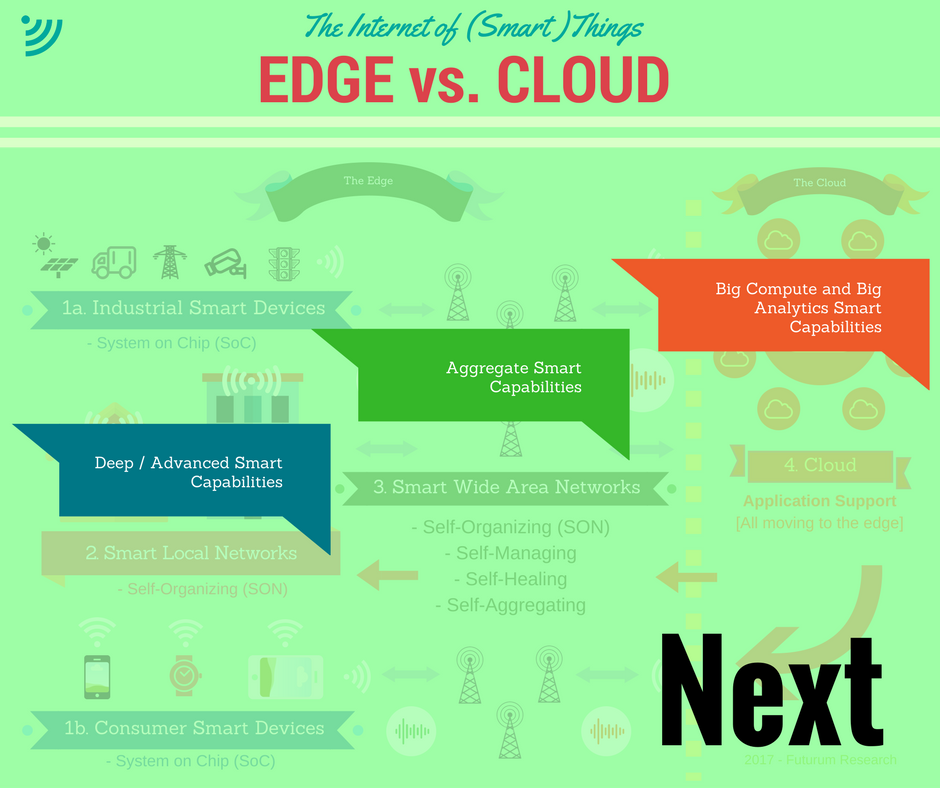 If you weren’t thinking about the IoT in this way until now, our job here is done – at least for today. Stay tuned for Part 4. There is a lot more to unpack, and we’re just getting started.